Malaysia's pregnant shooter, Nur Suryani Mohamed Taibi, has made the trip to London and will compete in next week's 10m rifle event, just one month before she's due to give birth to a baby girl. Doctors say Nur Suryani is fine to compete. In a sport that requires precision, calm and concentration, how will Nur Suryani compete with a child moving around her womb? "I will talk to the baby before I compete," she said in April. "[I'll say] no kicking, stay calm for one hour and 15 minutes only please." She understands that some may criticize her Olympic quest but isn't fazed by it. "Most people said I was crazy and selfish because they think I am jeopardizing my baby's health," she told reporters. "My husband said grab it as this is a rare chance which may not come again. Also, I am the mother. I know what I can do. I am a stubborn person." Nur Suryani is the 47th-ranked shooter in the world and a long shot for a medal. She also qualified for the 50m rifle competition but can't compete in it for obvious reasons.

I wish they'd elaborate on what the "obvious reasons" are. Because I'm pretty sure being pregnant obviously disqualifies you from competing in the Olympics. Every other "athlete" in this event is obviously pissed, because now people say "athlete" in quotes because obviously this isn't a very athletic "sport" when huge pregnant bitches can just stroll in and try and win some medals.

Seriously though, you're 47th in the world? But it's okay you know what you can do because you're the stubborn mother? Okay, so go ahead, pass Go collect $200 do your thing. But give credit where credit is due - anyone who can just command a newborn baby to stay calm for precisely an hour and 15 minutes when the kid isn't even really alive yet is pretty outstanding stuff.

PS - I hope they televise this event, and I hope this baby waits until her finger is on the trigger to unleash a fucking roundhouse on her kidney and an errant rifle blast goes rogue. Talk about television!
Posted by RP at 7/27/2012 11:21:00 AM 0 comments

Is Canadian Crimestoppers For Real? 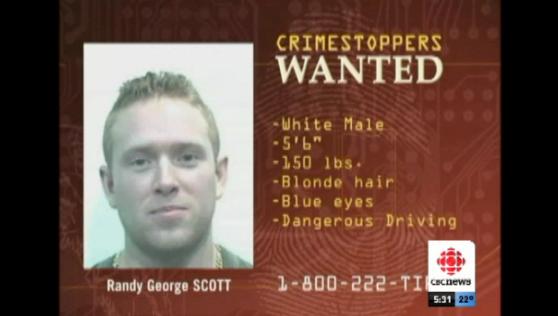 Yahoo - A motorcyclist turned himself into Canadian police earlier this week, after a video that seems to show him traveling at speeds up to 186 mph on a highway in British Columbia went viral. Randy George Scott, 25, surrendered to authorities at the Kelowna, B.C., police department on Tuesday. Canadian law enforcement had issued a warrant for Scott's arrest earlier this month. "The man allegedly responsible for the infamous YouTube video 'Victoria Highway Run 299km' is in custody," Kelowna police said in a statement. Scott was charged with reckless driving. The speed limit on the stretch of the the Trans-Canada Highway where Scott was allegedly speeding is 50 mph.

This is a joke right? Ha okay British Columbia, almost had me. Because no way is Crimestoppers actually putting up WANTED posts on TV for alleged speeders, right? Jesus Christ, just when I'm about to lose all faith in the United States and how far we've fallen, I'm proud to be an American right now. At least our Crimestoppers show is filled with meaningful criminals - people that rob and steal, rape and murder. Speeders are a bunch of pussies, they don't deserve any burn in primetime, save that shit for YouTube.
Posted by RP at 7/27/2012 11:09:00 AM 0 comments

So apparently I'm still getting hits on this site, don't know from where or why but I don't really care - I'm bored at work and my friend who I normally email with is actually going places in life and doing important things so looks like this is all I've got. Lucky for you guys. Anyway I'm probably going to throw some posts up now that I've got nothing better to do.
Posted by RP at 7/27/2012 11:01:00 AM 0 comments