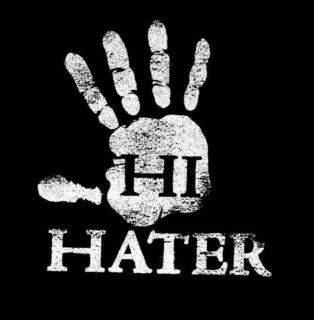 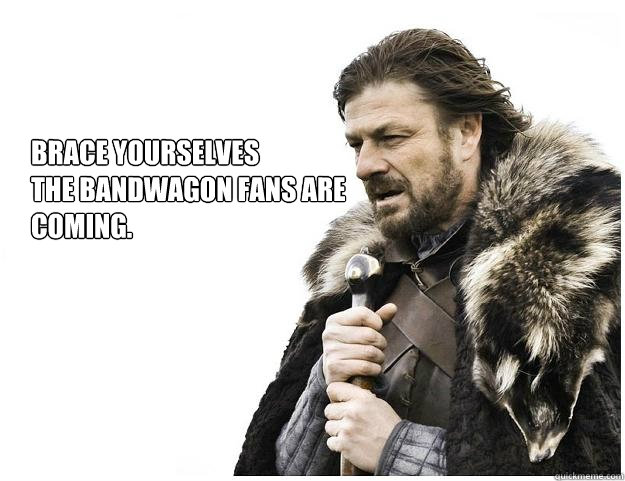 Haters and bandwagon fans. I know a couple of my friends who are huge Jets and Mets fans would love to have this problem, but I can't stand it. These two go hand in hand. The Giants haven't been World Champs for ten minutes and I'm getting bombarded with "Giants are lucky" texts and Facebook posts. Same people who send those are putting up huge defensive Facebook statuses about "Giants fans" in quotes like people who are Giants fans aren't Giants fans? And it's funny because who provoked them to do that? It's like this huge defensive hate filled post about wanting people to die but meanwhile no one actually said anything to you? It's confusing.

Then the reasons why they won become nothing about football or the fundamentals of the game and all of a sudden all about luck. Luck is what wins Championships now a days. Tom Brady actually not being good is lucky? How about the fact he's been unclutch since 2004? Why do people still think he's good? He chokes, end of story. He had Branch wide open and threw it right at Kenny Phillips, that's why Branch didn't catch the ball. If Brady had led him with the ball, that play might've gone for 40 yards, instead he threw it behind him and the ball actually should've been picked off. The Welker drop was an awful pass. He's wide open, he throws it to his back shoulder and high, just a shitty pass from someone who cannot possibly live up to the pedestal he's been placed on. After cruising through the first 3 quarters, Brady put up a passer rating of 28.7 in the most important part of the game. Not real sure how we can keep calling this guy clutch when he's done nothing to help his team win lately, and 2-4 in your last 6 postseason games is about as unclutch as you can possibly be.

But whatever, haters gonna hate and Eli's gonna beat Brady, just the way of the world. Haters do your thing.

The bandwagon thing fucking sucks, though. It's literally unavoidable, just nothing a fan can do about it. I am now clumped in to the millions of Giants fans around the world, no telling me apart from the rest now. There are going to be tons of fans coming out of left field and the ones who endured 15 degree wind chills in the parking lot and the ones who went to Indianapolis on a whim with no tickets just to be in the city the Giants were playing the Super Bowl in are left to get trampled and run over by the madness of these bandwagon fans.

Never bad to add new fans and followers, but it sucks to have they represent us as a whole. I had to go through this as a Yankees fan, and now Yankees fans have an awful reputation because of loud mouth attention seeking assholes who wear Yankees shit because they think it's the cool thing to do. They try to have arguments about sports and make the rest of us look like assholes. Celebrities who will become Giants fans will get interviewed and completely butcher someones name or basically admit they know absolutely nothing and it will reflect our fanbase as a whole. It's honestly the WORST. I think what's worse than a bunch of celebrities are the nobodies, the friends we have on FB that get into sports arguments with someone that actually has knowledge of the sport. It's so infuriating to watch them crash and burn while claiming Giants fandom, just crushing our fans reputation. Luckily for me, I've been overly public of my love affair with the Giants well before 2007, so that my friends actually appreciate these times for me. I just hate random people saying things like "WE DID IT!" when someone like myself, who's a die hard fan, had no clue this person even watched football let alone rooted for the Giants (not to mention the fact that "WE" didn't do anything, we're not on the team). Things like that bother me to no end because it just makes us all look like a bunch of assholes when you represent yourself as a Giants fan. If you don't know shit about sports just stay out of the conversation, it's in the best interests for everyone.
Posted by RP at 2/07/2012 11:15:00 AM