Floyd Mayweather Is A Racist. Weird. 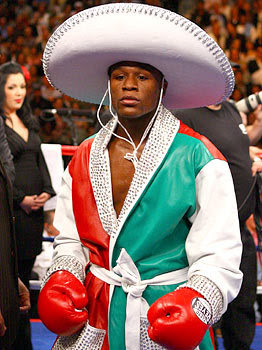 ESPN NY - Boxer Floyd Mayweather believes that New York Knicks point guard Jeremy Lin is getting national attention because of his race, rather than his exceptional play. "Jeremy Lin is a good player but all the hype is because he's Asian. Black players do what he does every night and don't get the same praise," Mayweather wrote on his Twitter account on Monday afternoon. Lin's agent, Roger Montgomery, didn't immediately respond to a text message sent by ESPNNewYork.com. Leonard Ellerbe, Mayweather's top adviser, didn't return a phone call from The Associated Press. Mayweather, however, responded to the story later Monday via a series of tweets. "Its OK for ESPN to give their opinion but I say something and everyone questions Floyd Mayweather," the boxer tweeted. "I'm speaking my mind on behalf of other NBA players. They are programmed to be politically correct and will be penalized if they speak up. "Other countries get to support/cheer their athletes and everything is fine. As soon as I support Black American athletes, I get criticized." Lin has become the talk of the NBA -- and the sports world at large -- for his unprecedented play over the last five games. Lin is the first player in league history to have at least 20 points and seven assists in each of his four career starts. The former Harvard grad has scored 109 points in his first four career starts, which is the most by any player since the NBA and ABA merged in 1976. In his last five games -- all Knicks wins -- the 23-year-old is averaging 26.8 points and 8 assists. Mayweather has drawn attention for racially insensitive remarks in the past. Mayweather went on a profanity-filled racist and homophobic rant against Manny Pacquiao in September 2010. In a video posted on UStream, Mayweather told Pacquiao, a Filipino, to "make some sushi rolls and cook some rice." He also said "we're going to cook him with some cats and dogs."

I honestly don't know what could possibly piss me off more, Floyd Mayweather talking again being the money greedy attention whore he always has been, or him playing the racist but saying he's not because he's black card. I'm so fucking tired of shit like this it's not even funny. So let's comb through these absolutely hilarious accusations from a boxer talking about basketball:

Racist Boxer: "Black players do what he does every night and don't get the same praise"

Stats from the article were pretty clear: "Lin is the first player in league history to have at least 20 points and seven assists in each of his four career starts. The former Harvard grad has scored 109 points in his first four career starts, which is the most by any player since the NBA and ABA merged in 1976."

So compared to black players, white players, orange players, purple players, green players, Lin is the ONLY player to do what he's done. Sorry was that racist? To provide statistical information about the league as a whole and not base it on race? Just that Jeremy Lin is doing things no one has done before 1976, but we shouldn't recognize that, we should talk about a LeBron dunk that happened in a meaningless regular season game like he's never dunked a basketball before.

Angry Racist Non-Basketball Player: "Its OK for ESPN to give their opinion but I say something and everyone questions Floyd Mayweather."

When you complain about race and refer to yourself in the third person, you're an asshole. ESPN gives their opinion's on sports because that's their job and that's what they get paid to do. You're a boxer who knows as much about basketball as I do, only difference is I appreciate numbers and don't give a fuck what ethnicity you are. I don't give a fuck if a space martian came from another planet and played point for the Knicks, as long as someone could run the goddamn point.

So bottom line, I don't know what Mayweather is expecting. The first of anyone to do anything always has and always will get attention. I guess we should blame his Eastern Conference Player of the Week on his race, and not the fact he just posted averages of 27.3 points, 8.3 assists and 2.0 steals. Definitely racism all the way, right?