How Bad Is Jay Cutler When It Counts? 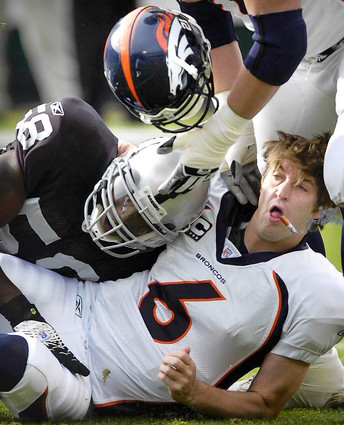 I don't go out of my way to despise Jay Cutler, it's just every single time I look at him I get angry... I feel like the guy from Step Brothers: I don't know what it is about your face, but I just wanna punch you right in the suck hole. It's not even so much about his play (which is fucking disgusting), it's how he reacts to his mistakes. It's NEVER his fault. I've never seen someone, a professional athlete, whine more like a baby than this guy.

Well anyway I don't care to watch him play football, ever. But sometimes it's unavoidable, the Bears get a lot of hype so they get a good amount of nationally televised games. Every time I watch him he shits the bed more than I thought anyone could possibly ever shit the bed. So I decided to look up his stats in nationally televised games since he came to the Bears for TWO first round picks (2009, 2010) and a third round pick (2009) along with Kyle Orton. A ridiculous haul for one of the most overrated QB's and biggest locker room cancers in the NFL. See the end of the post for the shakeout of that deal.

Now I'm not sure exactly what it is about the Vikings, but Jay Cutler obviously just plays well against only them. Unless he's playing the Cowboys in Dallas in a temperature controlled atmosphere. On top of the fact he sucks under the spotlight, he's notoriously unhappy at all times. He was disgruntled when he left Denver and he's constantly disgruntled in Chicago. He claims his calling out teammates and throwing them under the bus on the sidelines is because he wants to win so bad and that he's real competitive... But as evidence in the NFC Championship game, with a Super Bowl berth on the line, he's not all that competitive: 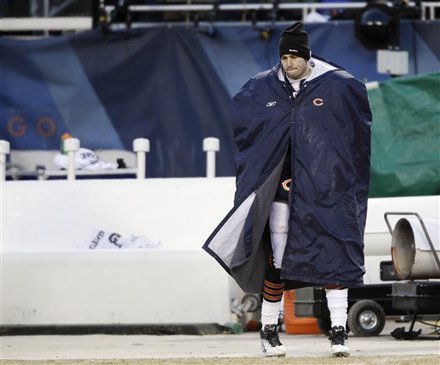 Not long after this "knee injury" which forced him out of the biggest game of his career (when he was 6 of 14 for 80 yards and an INT), stories started circulating about the validity of the injury.... Here's one I found particularly interesting:

An insider who lived in the same building as Kristin and Jay in Chicago tells HollywoodLife.com that the football player was “incredibly rude” to his neighbors and Kristin used to get upset over how mean he was. Even more interesting? She said he faked his playoff injury last year! “Jay was not nice at all. He would not talk to any of us [the neighbors] and was extremely stand-offish. He was all about himself,” reveals our source. So how was his relationship with former fiancee Kristin? “Kristin would call Jay a loser and a p**sy, and she’d scream it at him so everyone could hear. They would have fights about Jay being too conceited. They would also argue over how mean he was to people. She would make a point of saying hello to people in the hall, just to piss him off,” our insider laughingly tells us. In January, they got into a big blow-out argument after Jay injured his knee during the NFL playoffs. He was diagnosed with a MCL sprain. “Kristin called Jay out, saying she thought he was faking the injury and told him he was worthless.”

I think that tells us about all we need to know about this guy. Just to bury the knife a little deeper, many articles were published about how the same night of the NFC Championship game, in which he was so badly injured that he couldn't come back into the game, he was able to go out to dinner and walk up the stairs with no problem:

The Tribune‘s source said Cutler “limped a tiny bit,” when he came into the restaurant. Cutler and Cavallari were joined by 11 other folks in the private dining room upstairs. Of course they had to make it public that Cutler didn’t take the elevator upstairs, he decided to walk up the stairs. To add more insult to Cutler, we’ve learned that Saints quarterback Drew Brees played six games in 2010 with the same injury. His fullback Heath Evans was on ESPN earlier this week and he let the cat out of the bag when he talked about Brees playing with the same injury.

For comparison purposes, this was taken right from Philip Rivers' Wikipedia page:

In the 2007 AFC Championship Game, Rivers' was lauded by his teammates and the press for playing the entire game with a torn anterior cruciate ligament, which later required surgery and was ranked among the NFL Top 10 Gutsiest Performances. Chris Harry of the Orlando Sentinel said "I don't think anyone will ever accuse Philip Rivers of being soft." Kevin Acee of the San Diego Union-Tribune said, "To go out there and put his knee, and ultimately his career, on the line. It has to go down as one of the gutsiest performances."

And anyone that knows me knows that I'm not even a fan of Philip Rivers, but Goddammit do I respect him. I think by now we all know how I feel about Jay Cutler, for your sake I hope that we now share those same feelings.

For a funnier look at the douchiest face in all of sports, please check out http://smokinjaycutler.tumblr.com/ it's absolutely hilarious.


*The picks were wheeled and dealed since then but here's a quick overview: In 2009 the Broncos used the first round pick on DE Robert Ayers. The third round pick was packaged with their own third rounder to jump back into the second round to take TE Robert Quinn and for a 4th round pick which they used on G Seth Olsen. Both have since been released. The first round pick in 2010 was used on Demaryius Thomas, who after returning from an Achilles injury last season is now a top flight WR in Denver. They also got Eric Decker in that draft.