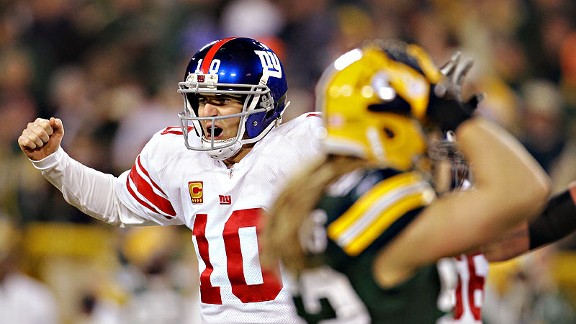 So who cares I haven't blogged in 10 days? No one on earth but more specifically the Giants, because they're too busy WINNING. Packers were too busy making State Farm Discount Remixes they forgot to get ready for a playoff game. Just can't handle the spotlight, that's why they couldn't go undefeated and that's why they couldn't put up a fight against the Giants. Can't blame them I guess, nothing you can do when you run into a fucking buzzsaw called Eli. Guy just carved through this Packers defense like it was nothing. Comes into Green Bay in the playoffs and just owns the fucking place. You think he or anyone else on this team gives a SHIT about going to San Francisco? Absolutely negative. They probably love it. Going to go in there, avenge their meaningless loss to them in a game they should've won by 20, and prove it when they beat them 30-10. Everyone wants to talk about Patriots/Giants rematch, I don't give a shit who the Giants play and neither do they - but I'll tell you one thing, you know whoever it is they're going to be absolutely SHOOK! Hottest team in the NFL right now, no question about it. Imagine JPP actually shows up in San Fran? Game will be over in the first quarter if he starts going off. Alex Smith is such a pussy I can't even stand it.
Posted by RP at 1/16/2012 10:27:00 AM