Snooki Takes Off Her Makeup And Looks Kind Of Hot? 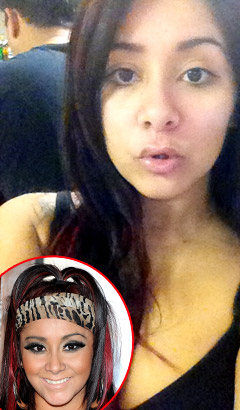 Gather - Who knew? Jersey Shore star Snooki actually looks good without makeup. Earlier today, star tweeted a picture of herself without her multiple layers of makeup that include plenty of bronzer and a super smoky eye. Earlier today, the guidette tweeted, "No make up day :) and IDC :)" with a link to the shocking picture. The response to her brave tweet was overwhelmingly positive, too. Perhaps Nicole Polizzi should keep her make under style for a while, or at least tone things down a bit in her everyday life. Throughout the day, fans tweeted things like, "Snooki's cute without make-up." Over and over, people were mostly positive about her toned down look. Do you think she will take this support as a hint? After receiving so many positive tweets, Snooki tweeted, "Can I just say how AMAZING my fans/supporters are! You guys really know how to put a smile on my face! Love You all beyond words...." She seems surprised that people appreciated her without makeup.

Look you can ask anyone how I feel about the Jersey Shore and they'll tell you not even to bring it up near me because I'll go ape shit. I hate this entire thing so much I could go on a month long rant about it, I can't believe these frauds actually make money from this shit, or that people even care about their lives.... That said and out of the way, I've always been a huge supporter of no makeup - maybe some basic minimums to cover up the gross parts, but you get the point.. So anyway I see this headline and first feeling is pure unadulterated excitement. I cannot wait to see this beastly looking thing with no makeup on and just go to blog town on her. I mean look at that picture in the bottom left and tell me you can't see some sort of amazon monster under all that shit? Well fuck me right? Because she kind of looks legit with no makeup. Granted she probably took 78 self portraits until she looked manageable, but credit where credit is due - she pulled it off... I would.﻿
Posted by RP at 1/19/2012 06:46:00 AM