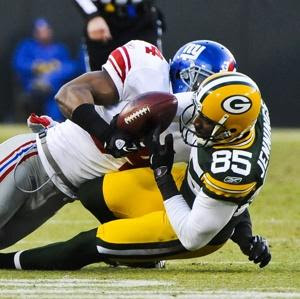 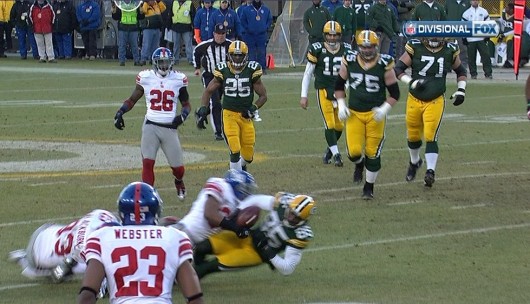 So let's get serious here for a minute.... I'm going to ask a ton of questions in paragraph form: What's the point of Instant Replay right now? If a play like this is missed, by someone with the benefit of looking at these same exact pictures if not with more clarity - then what's the point? Where does it go from here? Do they review the replay rules? Like what if the Giants didn't absolutely steamroll the Packers? What if they end up somehow going to overtime? This is the play we go back to, right? I mean the ref came out and clearly said with authority that the play stands as called like he was 110% positive Jennings entire body smashed off the ground before the ball oscillated in his arms, right? That's how I took it at least. I was in such shock that it took me about 10 minutes to finally bombard Facebook with hate filled status updates. I was a solid "that was so 10 minutes ago bro" late in Facebook land, but I didn't care, I had to get it out. I mean what the fuck honestly happened here? Listen to me now, imagine the Giants lost?? But it doesn't matter - this type of shit can't fucking happen in the playoffs, there's just no room for it. Take this away, Giants are +4 in turnovers for the game and the Packers don't score the TD on this drive, and essentially it's at the very least a 37-13 game. That's without the assumption that the Giants unbelievable offense doesn't score after picking up this fumble in Packers territory. I'm showing hypothetical mercy to the Packers, they got beat bad enough as it it. But seriously, no way do these refs get another playoff game right? This crew has got to be done at this point. Like only a handful of preseason games for next year, right? Gotta be.
Posted by RP at 1/16/2012 10:54:00 AM