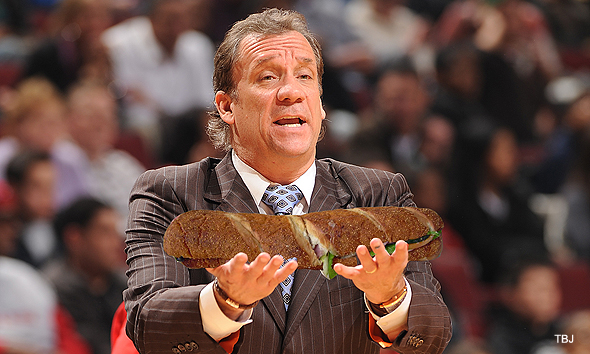 Yahoo - Head coach Flip Saunders appears to be taking these difficulties especially poorly. After Monday's 114-106 loss to the Rockets at the Verizon Center, he gave the media a sense of just how much of a toll the losing has had on his life. From Bullets Forever: "You can say it really kills you to lose, but until it really kills you? For me, for 3-4 weeks, I've been on a steady diet of Subway, which is 20 minutes from my condo, and I bring it back up to my apartment. Because like I said, you don't feel good about yourself. As a team, that's how it has to be. It has to really hurt a lot." There you have it: Flip Saunders hates losing so much that he's acting like your friend after the woman/man of his dreams dumped him for another man/woman. Someone should tell him to get back out in the world. Join a gym or take a dance class, Flip!

Well this pretty much kicks Subway right in the dick, huh? I mean here they are promoting healthy fresh food with every NFL player on earth, Michael Phelps and that retarded former fat guy Jared and Flip Saunders just comes out and tells them losing sucks so much he's been eating their shitty food to feed his depression. Some people use drugs, some use alcohol, Flippy here uses Subway. Phew - I almost had this shit for lunch. To actually say you're eating their food then follow up with "you don't feel good about yourself" just can't be what Subway wants to hear..
Posted by RP at 1/18/2012 02:06:00 PM