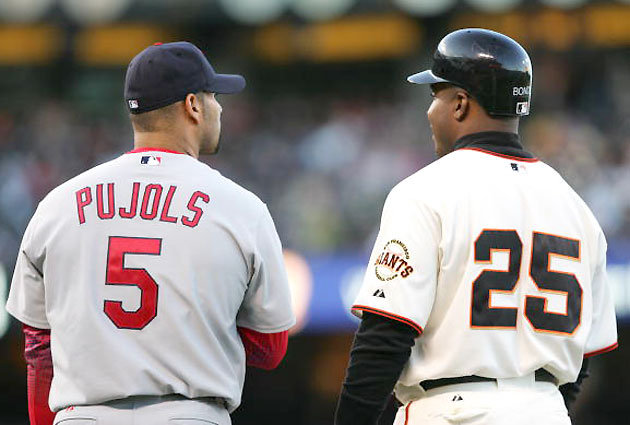 Yahoo - The nitty-gritty details of Albert Pujols' new $240 million contract with the Los Angeles Angels were released on Thursday and let's just say that it's good to be considered Phat. Over the next 10 years, the backloaded contract will give the first baseman an annual salary ranging from $12 million in 2012 to $30 million in 2021. He'll receive a hotel suite for all road trips, four seats to every home game at Angel Stadium and a luxury suite for his charitable foundation on 10 different dates a year. He'll also donate $100,000 each year to the team's charity and will receive $1 million annually for the 10 years after he retires as part of a personal services contract that he has the option to decline. Not everything is guaranteed, though. There are $10 million worth of incentives in the contract, including $3 million for his 3,000th hit (he's currently at 2,073) and $7 million for career homer No. 763, which would propel him past Barry Bonds on the all-time list.

And people wonder why athletes juice. I'll be honest, if I could have had the foresight at 17 years old, I would have been eating steroids for breakfast lunch and dinner. Seriously, sure Bonds is looked at negatively, but guy still has 762 home runs. Asterisk that shit all you want, but it's not changing. It's still there. And even if Pujols is found to have juiced, you think anyone really gives a shit at this point? I'm sure that's not gonna change the $7 million dollar home run he's gonna hit at some point. How about 10 years after your career you're still making 7 figures a year, for sitting at home during retirement. That's some 401K Alby is working with here. Say he plays 10 more years, it'll be 2032 when he stops making $1 million/year. That's crazytown. I'd have to work something like 30,924,802 years to make what he'll make in 1. Only in America, and guy wasn't even born here..... Some shit, huh?
Posted by RP at 1/06/2012 10:16:00 AM