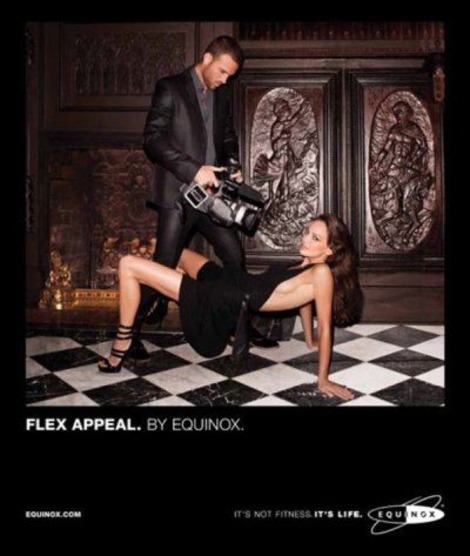 Shine - "Another couple million spent on the degradation of women. Good work fitness guys," writes a frustrated Facebook commenter. In fact, the "guys" behind the campaign is a woman. Equinox's in-house Creative Director Bianca Kosoy, a Parsons graduate and former Gap creative executive, is a fashion industry veteran. She oversaw the shoot and hired Richardson for a second time after working him on a campaign in 2011...Will it affect membership? "These ads are embarrassing. I would never come for a massage after seeing the ad for it," states one commenter. Another begs to differ: "I love the new ad campaign...The selection of models and the images show Equinox as high fashion, cool, hip and edgy." What do you think?

There are two types of people I can't stand - artists and advertising people. They live in another world. They say shit that makes no sense and say everything is "powerful" and "edgy" but seriously what the fuck does anyone walking into a gym or walking on the street looking at this shit actually care? I'll tell you what, I don't give a fuck. If I look at an ad or a billboard, I do that, then I continue on with my life. I don't think I've ever seen a billboard or an advertisement that made me stop and ponder how powerful it was and how edgy it made me feel on the inside. It's an absolute joke, these people all claim to be artists and shit and take things extra serious when in reality no one gives a shit about what they do.

Now other hand, these fucking commenters need to shut up. Maybe if you weren't fat these ads wouldn't bother you. Can someone please tell me what woman is being degraded by this ad? Frustrated Facebook commenter must be frustrated about being fat. And what the fuck is embarrassing about it?! Like what world are these people living in? Oh so now you won't get a massage because of this ad? First off the ad is for a gym, a place to go work out and get skinny and in shape like the people in the ad, not to go be a lazy fat person getting a massage. I honestly am at a loss that people are bothered by any ad, and of all ads this one. It's a woman fully clothed who's hot as fuck and a guy aiming a camera AT HER FACE. The way these commenters are reacting you'd think she was naked and finger blasting another girl with the camera shoved up her asshole.
Posted by RP at 1/06/2012 09:40:00 AM