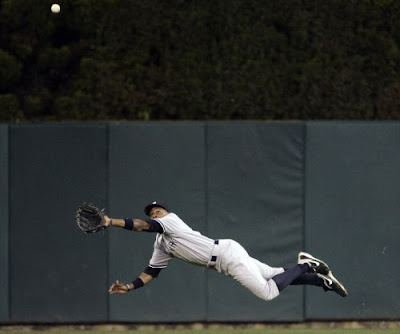 Granderson doesn't make that catch in the first inning, we're talking about a loss right now. Fact. Sure he misjudged that ball, but anyone who's played baseball knows that is the hardest play to make as an outfielder, he made the adjustment and literally saved the game and probably Burnett's career as a NY Yankee. The catch Granderson made in the sixth might have been one of the best catches I've ever seen watching a game live. Like I said yesterday I thought Granderson and Gardner were the only two ready to play and there was no way Grandy was letting the Yankees lose that game. For all the talk about the Yankees lineup and their potential to score runs, the defense was what came up huge last night.

The other positive was obviously Burnett, 5 2/3 innings and only 4 hits is like getting a 2-hit shutout from CC. Season on the line, everyone talking shit about him and he bossed up and came through and his wife is still hot. Pretty much scared the shit out of everyone in the first inning, but calmed down after the big catch by Grandy and did his job. The bullpen did their part and wait what? Phil Hughes actually did a good job? By the way Boone Logan was fucking dealing. Dude was pumping, hitting spots just striking out the side to end it like a boss. Jesus Montero is a fucking stud, first ever postseason at-bats? 2 for 2 with a RBI no big deal.

Now we've got Rookie of the Year Ivan Nova going up against Brazzers star Doug Fister for all the marbles. Yanks riding high off their first elimination game win on the road since Mo' got beat in the desert - crowd will be fuckin' rowdy in the Bronx, Bleacher Creatures dominating the roll call, Nova pumping strikes, Cano going upper deck. Everyone just take care of their shit and there should be a nice calm celebration Thursday night before it's on to meet up with the Rangers in the ALCS, you know the team the Yankees went 7-2 against this year. LET'S FUCKIN' GO!