Not only do I not believe Rob Gronkowski when he apologizes for spending an afternoon with a pornslut (her words, not mine), but I'm also insulted he even tried doing so.


Let's get the facts straight. 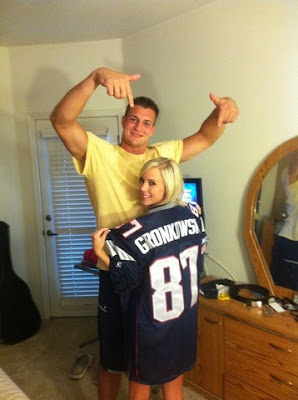 This picture - among others - was taken and posted to Twitter
Mr Gronkowski went to Arizona during his bye week, presumably to meet up with some old buddies from his alma mater, the University of Arizona, and to get laid. He is after all an NFL player. How do we know he was trying to get his rocks off? Well for one, he brought his own jersey on the road with him. Just a hunch but I don't think the Patriots were hosting a minicamp in Phoenix during their week off. Secondly, he came into contact with 20-year old Bibi Jones probably after her 7th period high school math class and convinced her to join him in a bedroom and don his jersey. Those are the facts. Everything else is left to the imagination. For example, we can surmise the two had some sex but until the video surfaces, we can't be sure.

Who is this BJ (pun intended) character anyway?  Let's take a look at her Twitter profile to find out (Walter Yego does the hard nose investigative work so you don't have to):

In Bibi's mind, she was put on this Earth for one two reasons, and they both rhyme with "luck".
Good for her for finding her niche at such a young age.