Had a good week last week even if I threw in a weird call about the Dolphins, didn't feel like going 3-0 obviously - when shit gets too easy I tend to lose my interest so I was just keeping myself on my toes. Couple games I really like this week so let's get right to it: 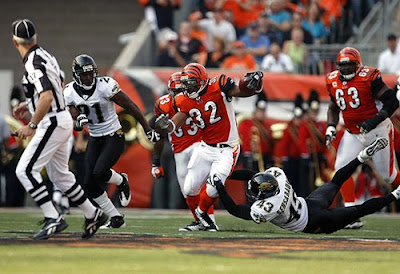 Bengals +2.5 - Not sure I completely understand this spread.. Basically saying the Bengals are just a half point better than Jacksonville.... I actually respect the Bengals who have been playing pretty good this season, and I think the Jags might be one of the worst teams in the NFL. If not for MJD they're right in the thick of the Andrew Luck race that has taken over the bottom of the NFL ranks. Apparently they don't need him because they have Sunshine at QB but I guess they don't notice he's not going to do much for them this year. The Bengals held Fred Jackson and CJ Spiller to only 78 yards last week in a big win over the Bills, I see them handling MJD long enough to get themselves in position to win this game. I like the Bengals S/U so them getting points is music to these ears. Bengals by 10. 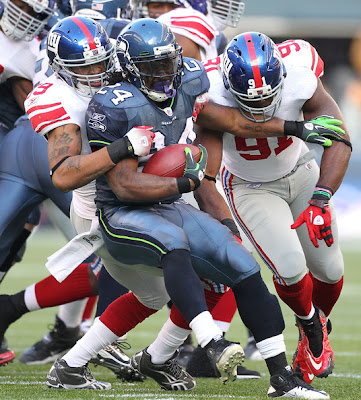 ﻿
Giants -9.5 - I've said before I normally try and stay away from large spreads like this (that's what she said) but this includes a west coast team traveling east. On top of that they play the early game on Sunday. That's just pure hell. On top of that, it's the Seattle Seahawks. That's hell inside of hell. Add to that Tarvaris Jackson is the QB - Can this get any worse? Yes.... Then add to that the fact that the Seahawks are 13-32 ATS on the road since 2006.﻿ That's what I love to call a LOCK! Only thing that scares me, Tuck and Jacobs likely not to play - what helps me rest easy is I actually like DJ Ware and hope he gets a lot of touches behind Bradshaw in this game. I like Eli staying hot and going for 275 yards, couple scores and they win it 31-13.
﻿
﻿

Packers -6 - I just used the word bro because I feel like Aaron Rodgers would say that, anyway.... Is this a joke?? The Packers by 6? Um did anyone see what happened last year when these two met in the playoffs? 48-21, the Packers raped the Falcons when the Falcons were the #1 team in the NFC. Newsflash bro, Packers are 10x healthier and 100x better. Falcons fucking suck. There's just no reason this spread isn't -100. If the Packers play 50% they should cover this, and as long as Devin Hester isn't around to completely juke the shit out of their entire special teams unit, they should be fine. Packers 30-15 ATS on the road under McCarthy? Okay, Rodgers goes for 325 and 3 TD's and Packers get the W by two scores. Clay Matthews two sacks and a forced fumble and/or fumble recovery.
*Honorable mentions: Raiders +6 @ Texans, Titans +3.5 @ Steelers

*Not going to do this every week but those are two more games I'm thinking about getting involved with this weekend.

Houston is looking good, but looked shaky without Andre Johnson in the second half of that Steelers game and they'll be without him for 3-4 weeks. I love DMC and think he's the best RB in this game. He will get a ton of touches which will result in a ton of yards. He will single handedly keep the Raiders close, if Jason Campbell can be mistake free they'll have a chance to steal one in Houston.

Steelers on the other hand, look like shit and there QB was in a boot all week - he'll be behind a terrible offensive line and going against a defense who can get hits on the QB. They're also 25th in the league against the run believe it or not and Chris Johnson is coming to town off of his first 100 yard game of the season and is looking to keep it going. That should help the already surprising Matt Hasselbeck be more comfortable in the pocket against a Steelers team who is unusually struggling getting to the QB this year. Outside of their Seahawks blowout, they have 2 sacks this year. Nuts. I like both these games but the other three jumped out a little bit more to me. Consider these as well... At your own risk.
Posted by RP at 10/07/2011 03:13:00 PM