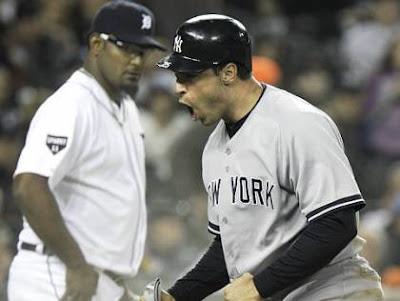 ESPN - After closing out the Detroit Tigers' win over the New York Yankees in Game 2 of the ALDS on Sunday, closer Jose Valverde believes the Tigers are a lock to win the series. "I think the series will finish in our house," Valverde told ESPNdeportes.com's Enrique Rojas and other outlets. "They have a good team, but the series is not (coming) back to New York. We have a big advantage," said Valverde, who was 49-for-49 in regular-season save chances. "We have Verlander ready for tomorrow. In the bullpen, we are ready." Valverde entered Game 2 in the ninth with Detroit up 5-1 and quickly made things interesting. The closer allowed a solo homer to Nick Swisher to lead off the inning. Jorge Posada then followed with a triple to deep center. After a Valverde walk to Russell Martin, Andruw Jones drove in Posada with a sacrifice fly, cutting the Tigers' lead to two runs. He then appeared to get a game-winning pop-out in foul territory off the bat of Curtis Granderson, but catcher Alex Avila slipped on the surface of the on-deck circle and failed to make the catch. Granderson eventually worked a walk, putting the winning run at the plate in Robinson Cano, who had six RBIs in Game 1. But Cano grounded to second to end the game. "Thank God my team won," Valverde said. The closer also guaranteed that he'd be available for Monday's game. "I can pitch in 11 straight," he said.

Get a load of this fuckin' guy. A regular Broadway Joe Plaxico Burress over here. If you wanna make a guarantee you make that shit before the series starts, or if you're a part-time blogger you make it after your team is up 1-0. Who makes a 1-1 series guarantee? Guys who aren't Mariano Rivera, that's who. Like how bad does this guy want attention?? Lions are 4-0 no one cares about the Tigers anymore, they can't stand it. It's hilarious. Guy almost blows a 5-1 lead and starts vomiting shit right out of his mouth. I guess this is just par for the course for teams not named the New York Yankees. They don't win? Ah but there's curses, ghosts, their manager. They win? Parades for game 2 of the ALDS and guarantees out of their assholes. Yankees? Been there done that, 27 fucking times. Shit is old news. Game 2 of the ALDS is like spring training, this shit is a tune up. For Jose's sake Verlander better throw a complete game, because if he needs to come into the game, shit is going to get real. Way to give the best team in the game even more incentive to embarrass you on your own field.

PS - Love that everyone is so focused on Verlander throwing like the Tigers lineup isn't shitting themselves they have to face CC again. Cy Young match up tonight should be sick, but I'll take my chances with CC considering Verlander hasn't beaten us this year. Oh yeah and Valverde probably should've remembered he sucks against the Yankees:

Sports Illustrated - The Yankees also scored on Valverde in two of his last three appearances against them, all coming in Detroit in early May, handing him a loss on May 2. In 5 2/3 innings of work against the Yankees this year, including Game 2, Valverde has walked six men against five strikeouts while posting a 6.35 ERA.