I am excited this week. I like a lot of games, but to my chagrin I can only choose three. I went 2-1 last week to put me 6 games over .500 and I plan on continuing that trend this week. I used up all my bad luck for the rest of the year on a poker tournament Wednesday so I should be ready to kill it this Sunday:

﻿
﻿
﻿
﻿ Carolina +4 - Cam Newton is an absolute covering machine. He's 4-0 (w/ 1 push) ATS in his career so far, no matter the circumstance he finds a way to hit a last minute score. All of this is well and good, but I honestly don't even think he'll have to pull those heroics - I feel Carolina wins this straight up. His chemistry with Steve Smith is outstanding, he's got two huge targets in Jeremy Shockey and Greg Olsen that he's been able to use in the Red Zone. His monster performances through the air have softened up defenses and opened up lanes for D'Angelo Williams and Jonathan Stewart and they've both ran much better the last couple weeks.They have a weak defense, but Atlanta's is much worse. They're 28th in the league against the pass giving up a shade under 300 yards per. Cam is averaging 322. I can easily see Steve Smith having a huge game against this secondary and another historic weak for Killa Cam as he continues his rout on Rookie of the Year honors. Cam throws 3 TD's runs for another. 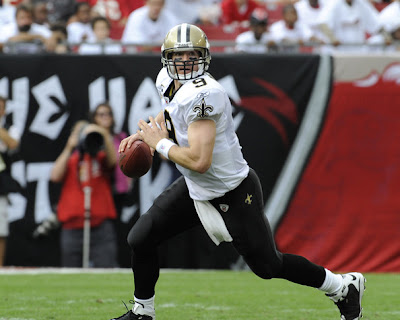 New Orleans -4 - The Bucs just made Alex Smith, yes THAT Alex Smith look like Drew Brees. 48-3?? They looked awful. Say they have a great week of practice and come out ready to play.... Well they're playing Drew Brees, the real Drew Brees this week. They're without Gerald McCoy, they're best defensive lineman. They struggle as it is to get to the QB, and with a Pro Bowler behind center for the Saints and the weapons they possess, this should turn ugly very quickly. The one thing I don't like is that the Saints tend to let weaker teams hang around a little bit, but I just don't see this being an option this week. I don't think they could let them hang around even if they wanted to, just by accident they'll be up two scores by the half. I see the Saints winning this in a landslide as Josh Freeman continues to regress like his name was Mark Sanchez. Jimmy Graham 2 TD's.

Green Bay -15.5 - Am I going to the well with Green Bay too many times? No. The Rams just flat out cannot be on the same field as this team. I hate saying it with such confidence, but there's just no way this game isn't won by less than 20. Honestly, if the Lions were still awful and the Packers already clinched the playoffs by now, I'd have a problem here. But the Packers don't even own 1st place outright in their own division. This is what keeps them focused and keeps them attacking on Sunday. There will be no 3rd quarter replacements, no letting off the gas, this is when a very good team beats the living shit out of a very bad team. Aaron Rodgers will go off for 430 yards and 4 TD's and I kind of think I'm lowballing it a little. Thank the Lions for keeping pressure on the Packers to make this an embarrassing game for the Rams. James Jones 2 TD's.

*Honorable Mention Games (Said I wasn't going to do this every week.... I lied... I like it so deal with it, more free amazing analysis for you.)

Oakland -7 - I love the Raiders right now. They're coming back to LA for what is sure to be an extremely emotional homecoming with a ceremony prior to the game for Al Davis. They played inspired last week and won despite not rushing the ball the way they're capable of, and they were UD's on the road to a good Texans team. Expect them to be doubly motivated in front of a packed nut house against the Browns who are without corner Joe Haden and center Alex Mack, arguably two of their most talented players. Cleveland is giving up 125 yards per on the ground, that's music to DMC's ears. He will absolutely tee off on this defense and I expect him to light it up all day long. Once they get a lead I wouldn't be shocked if he racked up some serious yardage. He will open up the play action for Jason Campbell which will give Oakland's 7 WR's with 4.3 speed time to blow past Cleveland's porous secondary. DHB may continue his hot streak with Haden out of the lineup. Raiders by 17. Wow.
Posted by RP at 10/14/2011 12:47:00 PM