Is This The Best Running Back In The NFL? 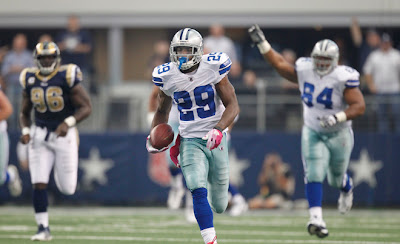 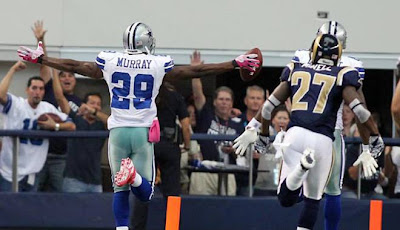 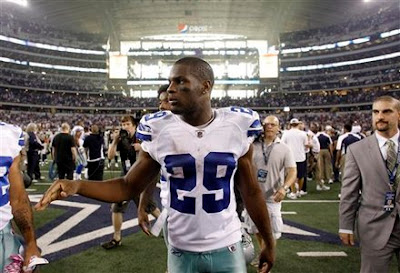 Let's get one thing clear here: I hate the Dallas Cowboys. I really hate them. I hate their owner and I hate everyone who plays for them. I hated when Bill Parcels decided to try and coach them, but he's still a NY Giant to me because he didn't really do much to help them win when he was there so it's okay. But this guy DeMarco Murray absolutely studded out yesterday. 253 yards on the ground including a 91-yarder to the house right off the bat.

How is anyone even questioning if he will be the starter when Felix Jones comes back after his 148th injury of his 10 minute career?

Better yet, look at this season:

So Murray pretty much equaled everything Jones has done this year in one game or really just 3.5 quarters. He did all of that in a game he didn't even start. Tashard Choice inexplicably started and had 8 yards and lost a fumble. Murray surpassed the Cowboys rookie record for yards in a game set by Hall of Famer Tony Dorsett and also the franchise record for anyone in a single game set by another Hall of Famer, Emmitt Smith.

The fact people are saying Jones will still be the starter is hilarious to me. Jones has never been an every down back, and all of a sudden he's that good that he can't be moved back to the 3rd down role? Just use him as a kick returner and change of pace back, that's where he should be. That's how he was used in Arkansas behind Darren McFadden and that's how he started off well in the NFL behind Marion Barber. He's not able to handle being used every down, he's injury prone and he's not as explosive as Murray.

Sure Murray did it against the Rams, fine. But who else ran for 253 yards against the Rams this year? No one. I don't care who you face, running for 253 yards in a game is nuts, and warrants immediate insertion into the starting lineup, no matter who is in front of you. Look, you get injured, your spot gets taken. That's life. If you wanted to stay the starter, you'd stop getting hurt every 5 minutes. Luckily Jones is going to be out next week when Dallas goes to Philly so Murray will more than likely get his FIRST NFL start against another bad run defense. Philly is coming off a post-lockout bye and won't have much time to prepare for this guy, so I expect him to have another good game. If the Cowboys are smart, which they usually aren't, they'll keep the ball out of Romo's hands and put it in Murray's - seems like the safest and smartest play. So I expect Romo to throw at least 4 picks next week.

PS - Also helps that I started him on my fantasy team in a week where two of my running backs absolutely would have crippled my chances of winning - Darren McFadden goes down after two carries and doesn't come back and Earnest Graham goes down with a ruptured achilles after 13 yards rushing. DeMarco Murray not only helped the Cowboys win, but he single handedly has kept me within striking distance as Ray Rice attempts to complete the comeback for me tonight. Need 12+ points, Ray Rice vs. Jacksonville? I like my chances. My prediction earlier in the week - Ravens 31, Jaguars 6.
Posted by RP at 10/24/2011 11:09:00 AM