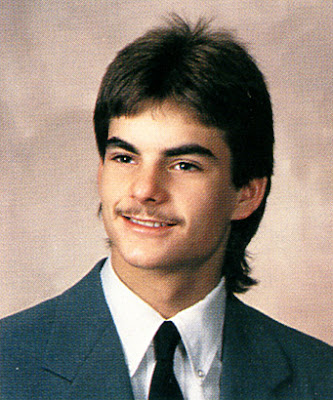 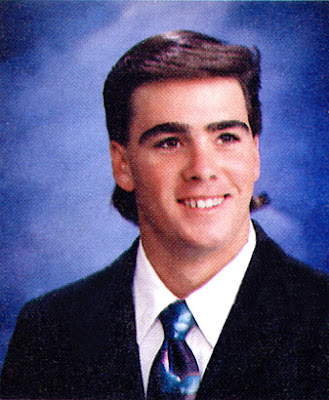 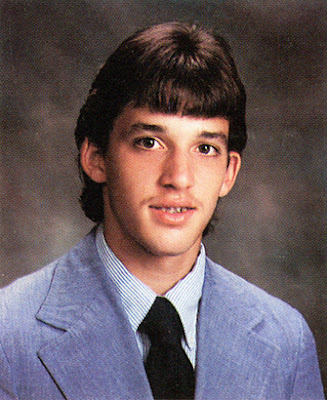 Mullets. Everywhere. This is literally EXACTLY what I expected when I thought about the day I came across NASCAR high school yearbook photos. Completely opposite world they lived in, if you had a fresh fade you were a fucking loser. Mullets all day urr day like a bunch of little toothless rednecks running around eating SPAM and drinking hot Budweiser's like it ain't no thang. Number one and number two are easy and to be honest I'm a little surprised Jimmie Johnson rocked a mullet - just didn't see that one coming. He's the only one I thought was the "outsider" like he grew up in NY or something and just decided to race a car one day because he understood it took no athletic skill at all and it wasn't a real sport and he got cut from the baseball team and didn't want to disgrace his family by becoming gay and playing lacrosse so he set out to show all these rednecks he could pick up racing and just win with no problem even though he didn't know shit about it type of thing. But I guess in the end he's just like these guys, mullets for days. But number three.... Who the fuck is that? No way you guessed that one.... Tony Fuckin Stewart! No fucking way right?? Yo Tony you got some shit on your lip! Sweet mustache bro. Clean it up! This guy does Old Spice Swagger commercials?? Where's your swag right here Tone? You're already killing it with the mullet, but the thin 'stache is just overkill at this point, way over the top - less is more.... Less is more.... If you can't grow it thick like my man Jeff Gordon, just accept the fact you don't have what it takes. Not many people can rock the gross 'stache slash mullet combo like my man Jeff, gotta know your limits brother.
Posted by RP at 10/27/2011 08:57:00 AM

Email ThisBlogThis!Share to TwitterShare to FacebookShare to Pinterest
Labels: NASCAR