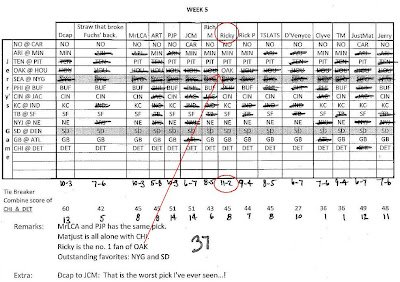 "Ricky is the no. 1 fan of OAK" indeed! That's how you play inspired football Raiders! Too bad I had a good weekend of betting in Week 4 and decided not to bet this week. Until I lost my money like an irresponsible asshole then went in on the Pack and broke even. Then I check my work pick 'em and straight dominated. I obviously still don't believe in Buffalo, credit to Mike putting them as a LOCK. Great call with the Giants by me and the rest of the world. I put them as a lock and they're one of 2 games I lose this week. Leave it to Eli. On to the games:

What I said about the Jaguars/Bengals game:

The Bengals held Fred Jackson and CJ Spiller to only 78 yards last week in a big win over the Bills, I see them handling MJD long enough to get themselves in position to win this game. I like the Bengals S/U so them getting points is music to these ears. Bengals by 10.

What was the score again? 30-20? Bengals by 10? MJD kept in check mostly by terrible play calling and not the Bengals defense, but otherwise they held him to 85 and a TD and took care of business. Benson did nothing but Dalton threw for 2 TDs and they took advantage of two Jacksonville fumbles to win the game... By 10.

What I said about the Seahawks/Giants game:

I've said before I normally try and stay away from large spreads like this (that's what she said) but this includes a west coast team traveling east..... Then add to that the fact that the Seahawks are 13-32 ATS on the road since 2006.﻿ That's what I love to call a LOCK! Only thing that scares me, Tuck and Jacobs likely not to play - what helps me rest easy is I actually like DJ Ware and hope he gets a lot of touches behind Bradshaw in this game. I like Eli staying hot and going for 275 yards, couple scores and they win it 31-13.

These are the real head scratchers. You pick a team in a survivor pool, you do all your homework and due diligence, just knowing that somehow something would defy all logic, common sense be damned, and the Seahawks would win. Well, that just happened. Nothing more to say here. Giants made a good play, then a terrible pee-wee football mistake, good play, nightmare mistake, just a see saw of puke all day. Let's get this over with....

What I said about the Packers/Falcons game:

Is this a joke?? The Packers by 6? Um did anyone see what happened last year when these two met in the playoffs? 48-21, the Packers raped the Falcons when the Falcons were the #1 team in the NFC. If the Packers play 50% they should cover this.... Packers 30-15 ATS on the road under McCarthy? Okay, Rodgers goes for 325 and 3 TD's and Packers get the W by two scores. Clay Matthews two sacks and a forced fumble and/or fumble recovery.

This was a game I needed to win, and it looked real bad for most of the game. It's like the Packers read my blog and decided it was good to play at 50% the entire game because that's what they did. Well they did that and they covered the spread. Aaron Rodgers steps up and dominates the second half like Brett Favre wishes he could and they pull away at the end. Matthews had two QB hits, so just missed those two sacks I called for - and he probably had a forced fumble and they missed it in the stats or something.

Honorable Mention games - Oakland with an inspired win over a flat Texans team, Tennessee takes a dump on Pittsburgh's field and gets their ass kicked. CJ2K at least looked decent finally getting into the end zone this season but they take the L.