Am I Good Or Am I Good? Week 4 Edition 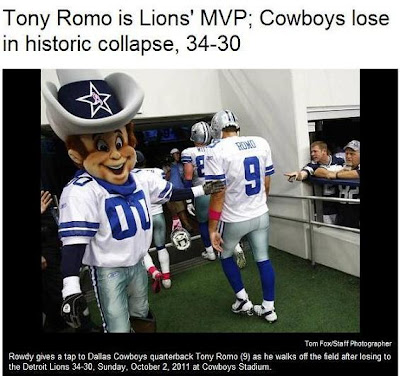 ﻿
Another big week for me as I improve to 8-3-1 this season with my LOCK picks. Most of the games Sunday went do to the last second to see if teams would cover the spreads, but for me I hit 2 out of 3 for the third week in a row. Props go out to Mike who hit all three of his picks to turn around a slow first couple of weeks. Even better, he took two extra games over on TheSportsBanter and hit those as well for a perfect 5-0 week! Nothing worse than when your birthday lands on a Monday, but going 5-0 helps, congrats.

On to the part where I show off:

What I said about the Lions/Cowboys game: Romo is still not 100% which means he's got an even better shot at making "I wish I was Brett Favre" throws and getting picked off. I think Calvin Johnson continues on his pace to score 94 TD's and the Lions win by a touchdown in Dallas.

Not sure if I could've been more accurate on this one. Cowboys were up 24 and Romo tries to imitate Brett Favre, throws 3 INT's and two of them are brought back to the house on consecutive possessions. Calvin Johnson catches two more TD's late, continues his monster pace. Lions win by 4.

What I said about the Saints/Jaguars game: I don't understand this spread. Colston coming back this week, against the Blaine Gabbert led Jacksonville Jaguars. 7 points? Jax needs at least 21 to start, right? ﻿Brees and the Saints just put up 40 and outscored Matt Schaub and the Texans by 7. You really think the Jaguars are keeping pace with the Saints? Unless MJD is running, throwing, and catching all over the field then there's no chance in hell this game is within 14 points. This is an absolute lock.

Brees throws for a season high with 351 yards, but only throws 1 TD and was picked off twice. Not ideal. But the Saints were still able to take care of business and win it by 13. MJD only got 11 carries and Gabbert couldn't do much in his 2nd career start. MJD needed to be more involved if they wanted a chance, but they kept it closer than it should have been. I had to check the box score, and yeah Colston was back, 1 catch 8 yards.

What I said about the Dolphins/Chargers game: I don't like the Chargers. I said it. They don't have Gates healthy, they haven't been able to find a rhythm offensively and I hate their defense. They're notoriously a terrible first half team, and they almost lost to the Kansas City Chiefs last week as 14 point favorites. I think this game stays close and will be decided by a FG.﻿

Even after I posted this I admitted this was a reach, and no where near a lock. But I felt confident the Chargers wouldn't cover just by looking at recent history. Norv Turner can never seem to get his team going before November and December. This game was actually close throughout and was 13-10 at the half. I was feeling good at that point, but then it turned into the Dan Carpenter show - Miami could not move the football past the 20 yard line. Can't even say their Red Zone offense was bad because it couldn't get there. As they kicked FG's the Chargers matched along with a TD to cover the spread.