Week 4 Picks: Don't Bet your Life On It

Finally, a winning week. First time that's happened all year. Feels good to get the monkey off my back. Now we can do some actual damage.

Giants -1.5: This is not an optimal situation for the Giants travelling cross-country after a huge road victory against their biggest rival. However, the Cardinals are not a good football team. They barely survived Cam Newton in Week 1, narrowly lost to the Skins in Week 2, and lost in Seattle last week. With Beanie Wells listed as a GTD (fantasy football kryptonite), Larry Fitzgerald is their only threat. Assuming the Giants double him all game – and there’s no reason not to – they should be able to leave the desert victorious.

Chargers -7: San Diego let Kansas City hang around for way too long last week. If the Chiefs had one of the top 28 quarterbacks in the league, they probably win that game. Luckily for the Chargers, they don’t and Matt Cassel played like himself in the fourth quarter. Despite the win, the Bolts have to be a little embarrassed that they only won by three despite being 15-point favorites. I think they come out on a mission this week and dominate. 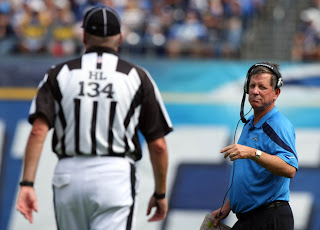