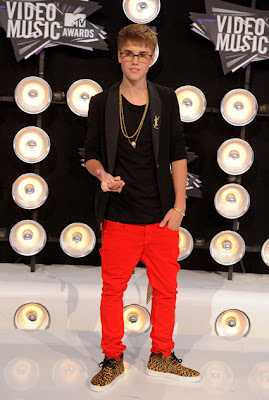 Yahoo! Music - Justin Bieber wears what's comfortable -- it's as simple as that. The pop sensation rocked the red carpet at Dolce & Gabbana's Fashion's Night Out event in New York City, where he spoke about his own fashion choices, including women's jeans.

Bieber spoke to Life & Style magazine about his affinity for ladies' jeans. "I've worn women's jeans before because they fit me. It's not a trend; it's just, whatever works, works." Again, Justin says this isn't a trend, so if everybody starts wearing Not Your Daughter's Jeans, don't blame him.

Bieber was responding to a question about Kanye West's decision to wear a women's sweater. "It wasn't (so he'd) look like a woman in a sweater; it was just a regular sweater that happened to be a woman's."

I hate this kid so much I can't even stand it. I'm not going to sit here and respect a fucking thing he does just because he's made money being gay. Everyone has their right to dress however they want or to do whatever they want, but don't fucking sit here and tell me you wear shit because it's comfortable. You're a fucking wanna be hipster which might be worse than being a hipster. Look at that fucking get up! Nice shoes you fucking loser. If someone wore that in real life, they would be dead in 10 minutes. Must be nice to have bodyguards protecting your blind side. I honestly think he got into this business because he couldn't make it out in the real world. He's like 4'11" 93lbs. and is dumb as a rock. He's the male version of Lady Gaga to me, just tries WAY too hard. Thing is, that they both have like a cult following of freaks who will literally do anything to smell their shit if they let them. Odds are they would. It's so sickening, like people actually respect these frauds and what they do. You make fucking music, you sing shit other people wrote for you. You're not fashion icons, stick to what you're faking good at. It gives me so much hope that I will succeed in life that people like this have made so much money. Shows how fucking dumb Americans are. No wonder every other country is kicking our ass inside out at all facets of life, because half our population is following this fucking asshole on Twitter.

PS - The comments on the article had me dying, especially the last one: 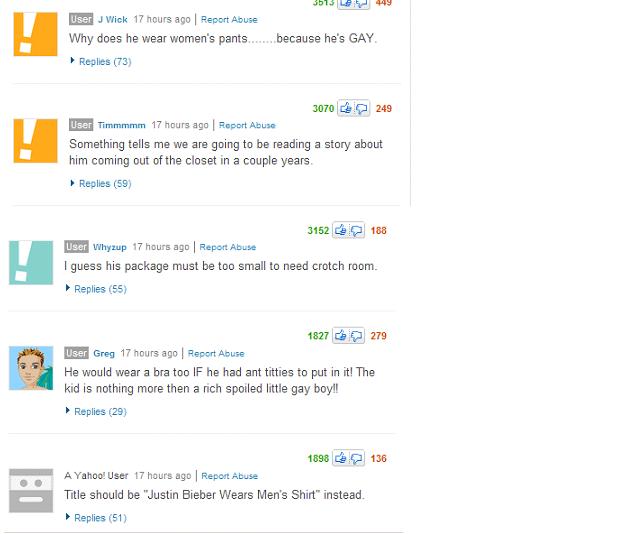