Live Poultry And Random Rabbit Available At Some Dump In Queens 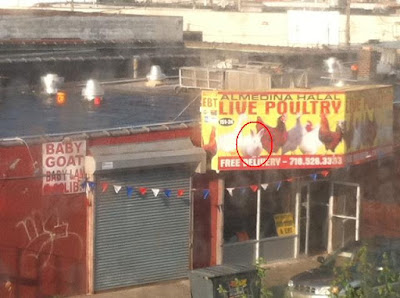 So I see this place on the way into Jamaica on the LIRR. Anyone who lives on the south shore of Long Island will probably see this shit when they're on the train. First of all this place is an absolute shit hole. It's where innocent animals are delivered on trucks to get slaughtered to shit - can't stand seeing it but I eat them anyway. But then you read the sign that says "Live Poultry" with a picture of 19 chickens and some weird rabbit that I guess wanted in on the picture? I don't know this rabbits deal, but maybe he just was told the picture was going on Facebook and got all pumped to show off he's cool with the chickens and had no idea he was on death row. I'd love to see some terrorists blow this shit up but unfortunately they all work here so kinda shit outta luck with that one.

PS - Just searched about this shit and apparently rabbit's are considered poultry now just so they can't be protected under some Slaughter Act passed back in the day and are allowed to go get slaughtered like motherfuckers whenever they want. Whatever sign sucks anyway fuck this place.
Posted by RP at 9/27/2011 11:19:00 AM