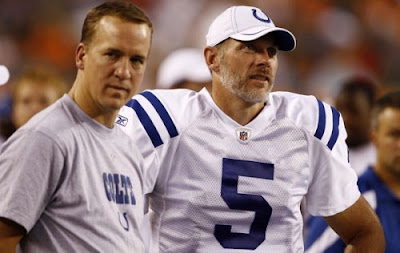 
Irsay said it was possible Manning would practice in December, but he is not expected to play this season, media outlets in Indianapolis reported.


Irsay later tried to clarify his comment with a post to his Twitter page at 10:28 a.m. ET, making it clear he didn't say Manning would definitely miss the rest of the season.


"I didn't say Peyton out 4season FOR SURE,keeping him on ActiveRoster n taking it month by month/Outside chance of return n December possible," he wrote.


Without the four-time MVP the Colts have started the season 0-3.

If you're trying to tell me this isn't some elaborate plan to get the #1 pick aka Andrew Luck, then you're bonkers. I see you workin' Colts. I'm not hating on it either. If you want to throw away an entire season then go for it, no hair off my ass. Still shocked you almost beat Pittsburgh last night, but if this is the plan you need to relax - because you played way too hard last night. What happens if you accidentally win? You can't do that shit, you have to keep your distance. I'd say at least by 10 points - keep it a two score game.