Soooooo.... Everyone Have Fun At Their Parades This Weekend? 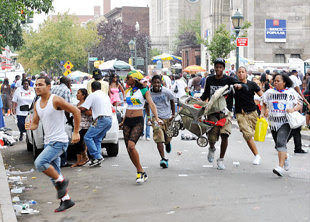 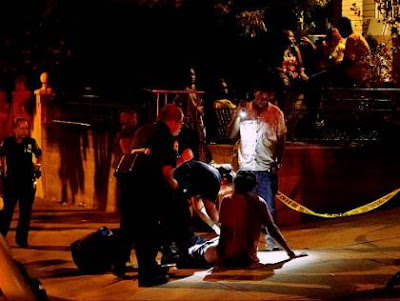 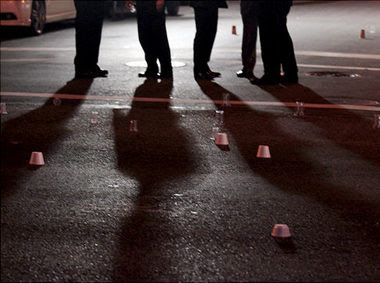 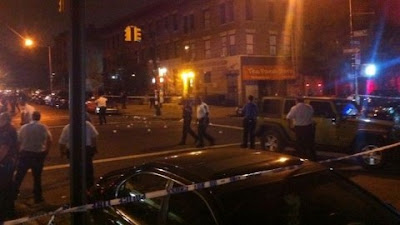 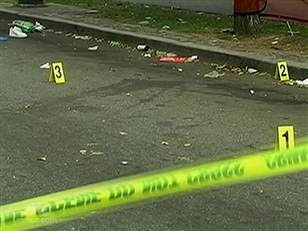 Yahoo! - The surge of violence wounded eight and put the number of people shot over the weekend around the city to at least 48, including two people who were killed Sunday night. It came the same day the Daily News reported that 24 people were shot in the 24-hour period beginning 6 a.m. Saturday.


Among other shootings citywide over the weekend:

* A 15-year-old boy was shot in the arm in a courtyard of the Kingsborough Houses near Dean St. and Ralph Ave. around 6:25 p.m. He was rushed to Kings County Hospital.

* A 33-year-old man was shot in the abdomen on W. 127th St. in Harlem about 11:45 a.m. Monday and rushed to Harlem Hospital, cops said. His injuries were not life-threatening.

* A 44-year-old man was shot in the right leg at Empire Blvd. and Mckeever Pl. in Brooklyn about 6 a.m. Monday, cops said. He was taken to Kings County Hospital in stable condition.

* A man was shot in the torso at Linden Boulevard and Nostrand Ave. in Flatbush, Brooklyn, about 4:20 a.m., cops said. The man, whose name and age were not immediately released, was rushed to Kings County Hospital in very critical condition.

* Two men were shot in the abdomen about 6:40 p.m. Sunday in front of the Marcy Houses on Nostrand Ave. in Bedford-Stuyvesant, Brooklyn, cops said. Kenya McCollum, 26, who lived in the Marcy Houses, was rushed to Woodhull Hospital, where he died. The other victim, a 22-year-old man, was in stable condition at Kings County Hospital.

* A 24-year-old man was shot in the head in front of the Unity Plaza Houses on Blake Ave. in Brownsville, Brooklyn, about 10 p.m. Sunday, cops said. Donavan Dallison, of Crown Heights, died at the scene.

* A man was shot in the chest near Second Ave. and E. 99th St. in Manhattan just before midnight Sunday night, cops said. His injuries were not life-threatening.
Police spokesmen said they were unaware of any arrests in the shootings.

* A 17-year-old boy was shot in the leg at E. 167th St. and Washington Ave. in Morrisania, Bronx, about 6:15 p.m. Sunday. He was taken to Lincoln Hospital in stable condition.

* A man was shot in his foot in the Whitman Houses in Fort Greene, Brooklyn, about 1 p.m. Sunday, officials said. He was taken to Kings County Hospital in stable condition.

* A woman was shot in her lower back on South Road near Sutphin Blvd. in Jamaica, Queens, about 9 a.m. Sunday. She was in stable condition at Jamaica Hospital Monday.

NOTE: The ones I highlighted in bold happened an average of two and a half miles from where I'm sitting right now. Fuckin' pumped to be here. Anyone have any riot gear they're not using? Need an outfit for work tomorrow.

Well easy to say I'm happy as a pig in shit I wasn't around this weekend. Pretty excited all I did was spend $1,200 more than I should have in Vegas instead of taking a stray to the dome piece. 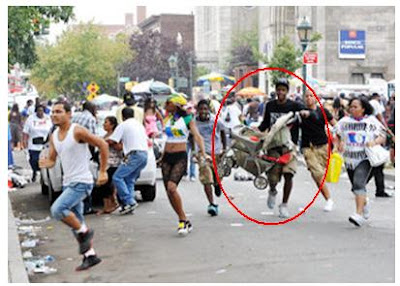 ﻿
Anyone know? That's got to be taking advantage of the opportunity. He's stealing that baby carriage even if it means getting shot. Bullets flying everywhere, guy focuses up and sees an empty baby carriage and just takes it. Who's going to notice in such chaos? Great move. I would've went with something like a car, but I also ain't going home to my baby mama empty handed with something she wants.
Who goes to these parades anymore anyway? In the last 10 years I can't think of one parade in the city that hasn't resulted in someone getting straight yoked up. These things are like an excuse to shoot people. I don't know what it is - I can't speak for the guys emptying clips because I'm too much of a pussy to attend one of these things, so if anyone knows feel free to let me in on the secret. What goes on at these things that makes people go back for more? Literally risking their lives to be at the parade, there's got to be some serious fuckin' going on or something. Like is it automatic sex as soon as you get to the parade route? Do people who attend the parade get an immediate wad of cash and then their choice of sexual partners with no repercussions in real life? Then after all that is done they get 3 wishes granted by their own personal genies? Seriously is that even enough to attend knowing there's a 50/50 shot you end up critical in Kings County Hospital?
I think I'm going next year to find out what all the fuss is about.
Posted by RP at 9/07/2011 12:48:00 PM