How Fucked Are The Red Sox? 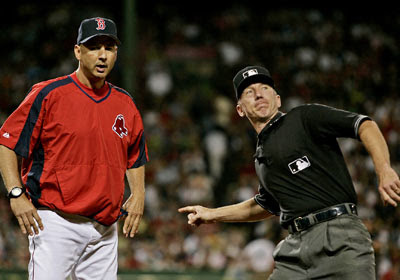 Sure when you collapse worse than anyone in Major League history, someone has to take the blame, but I'll tell you what - when that guy is the only manager to win you a World Series in a billion years - find someone the fuck else to blame. No way this guy deserves to be fired in my opinion. Guy should get the respect to leave on his own terms for services past rendered. It's not like they wouldn't win with him in the saddle next year, but now I'm really wondering how bad this team will be without him there.

As a Yankees fan I was spoiled growing up with Joe Torre as the manager. Was always cool under pressure, even keeled, calm, respectful, fired up when he needed to be. Same goes for Francona in my opinion. I hated the Red Sox with all I had, but always respected (most of) them. Francona ran that team the right way, he gave them slack at times but always knew when to pull the reigns. He had to manage absolute clowns like Manny Ramirez, Kevin Millar, Byung-Hyun Kim, Pedro Martinez, just a bunch of look-at-me guys - and he won. He was able to put a tent on the circus and win an impossible championship, and he did it twice. There's always hatred in the Red Sox/Yankees rivalry and fans say a lot of shit, but real fans will always have a certain level of respect for an opponent and I have the utmost for Francona. Guy was always good with the media, handled winning and losing well, just seemed like a good guy - I never looked at him like I would look at Manny - that he's good but wouldn't want him to be a Yankee. I'd take Francona in a heartbeat to be the manager of the Yankees. I'm glad they lost in absolutely epic fashion, but I wish Francona the best and hope he has success where ever he ends up - and whatever team that is will be lucky to have him.