All you need to know: After falling behind 7-0 three minutes into the game, the Jets jumped to a 17-7 lead by the middle of the second quarter. Oakland, specifically Run DMC, then scored 24 straight points to put the game away.

Darren McFadden puts up video game numbers: McFadden rushed 19 times for 171 yards and two scores. This is a NYJ run defense that has finished in the top for each of the past three seasons.

They are no slouches, and DMC made them look terrible. Plus, he tweaked his groin in the fourth quarter or the numbers would have been bigger. Guy is an absolute beast. 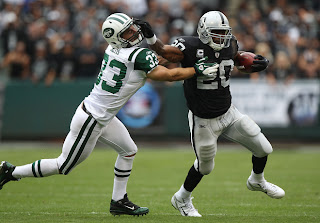 Antonio Cromartie wiped out all the good he did in Week 2: He committed four penalties, fumbled a kick return, and got picked apart through the air. F- grade for this one. Needs to improve. He also bruised his ribs/lungs putting next week's game in question for Cro.

Sebastian Janikowski changes games: Oakland HC Hue Jackson knows that if his team can get inside the opponent's 45, he can chalk three points on the board. That makes the Raiders dangerous on all downs and distances in positive territory.

Nick Mangold's injury left a gaping hole in the middle of the offensive line: He needs to get healthy in a hurry.

I'm still not ready to wholeheartedly trust Mark Sanchez: His first quarter INT in the end zone was a terrible, terrible, terrible decision that everyone in New York saw coming. He needs to do a better job protecting the ball. Sanchez also broke his nose in the game.

WR Jeremy Kerley impressed me with his toughness/stupidity: After fielding a punt, Kerley got his helmet knocked off and still tried to gain yardage (even though the play was blown dead). His teammates looked at him like he was insane but you could see they respected the effort.
Losing TE Jeff Cumberland for the year is not a minor deal: JC was a capable run blocker and allowed Dustin Keller to do his thing downfield in the passing game