When Do People In Japan Think About Maybe Living Somewhere Besides Japan? 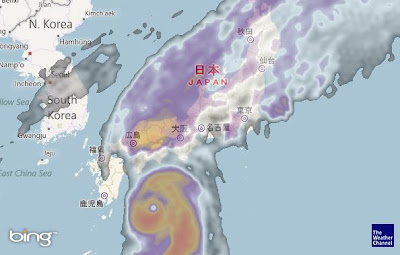 Yahoo — More than a million people in central Japan were urged to evacuate Tuesday as a powerful typhoon approached, triggering floods that left two people missing.

Public broadcaster NHK said about 1.3 million people have been ordered or advised to leave their homes, including 80,000 people in Nagoya.

Heavy rains as the storm approached caused floods and road damage in dozens of locations in Nagoya and several other cities, the Aichi prefectural (state) government said.

Television footage showed Nagoya residents wading through water up to their knees. In parts of the city near swollen rivers, rescue workers helped residents evacuate in rubber boats.

Police in nearby Gifu prefecture said a 9-year-old boy and an 84-year-old man were missing after apparently falling into swollen rivers.
The Meteorological Agency said the typhoon was located off the southern coast of Japan's southwestern main island of Shikoku on Tuesday night with winds of 89 miles (144 kilometers) per hour. It could reach the Tokyo area by Wednesday afternoon, the agency said.

A typhoon that slammed Japan earlier this month left about 90 people dead or missing.

Seriously, can Japan get a break yet or what? Earthquakes, hurricanes, flooding, it's like New York over there. But when do they just decide it was a bad investment building all that shit on an island out in the Pacific Ocean and just move on? Time to just pack up whatever buildings you can and move to the main land. I mean if I'm a kid growing up over there and I somehow made it through all this shit, I'm on the first gondola out of that place. I'd row that shit over to Hawaii, that island seems to have it's shit together. I mean if you're gonna be an island at least know how to do it.
Posted by RP at 9/20/2011 03:11:00 PM