Was there ever a doubt the Jets would pull off a miracle victory on 9/11? Ok, yes there was a lot of doubt, but for some unexplainable reason I knew they would make a comeback. I really can’t explain it. It’s like the football gods wouldn’t allow a Jets loss.

Overarching theme of the night for the Jets: resilience. The Jets fell behind by two possessions three different times last night. Each time, they answered with a score on the very next drive. They fell behind 10-0, then scored a touchdown to close out the first half. Then they went down 17-7 only to answer with a field goal to cut the deficit back to seven.
After falling behind 24-10 early in the fourth quarter, Sanchez led a seven-play, 84-yard scoring drive to put them back within striking distance. A huge drive that seems to get lost in the shuffle.
Then, after the Jets forced a Dallas turnover on the ensuing drive, Sanchez lost a fumble of his own. The defense then manned up to force a punt, which was blocked.
Welcome to relevance, Joe McKnight. In a game where the Jets only rushed the ball 16 times for 45 yards, their third-string running back made an enormous difference by blocking a punt which directly led to the tying touchdown. I apologize for suggesting the Jets should trade you last week. 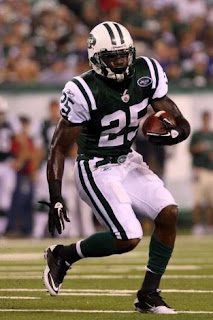 This guy justified his roster spot.

Antonio Cromartie really struggled on Sunday night. He was beaten on both of Dallas’ passing scores, including one in which Miles Austin out-willed and out-muscled the ball away from Cro in end zone. It’s a great sign the Jets were able to win without him playing his best.
The Jets reallllly lucked out with the Dez Bryant injury. In the first eight minutes of the game Dez, had three catches for 71 yards and a touchdown along with a 12-yard punt return. Soon thereafter, he started cramping and had no impact on the game’s remaining 53 minutes.
The Jets committed zero penalties. Very disciplined football out of Gang Green. Have to give Rexy credit.
The Jets LBs combined for 19 tackles, two sacks, and a fumble recovery. This is a top-2 linebacking corps in the NFL. I love watching Bart Scott-David Harris-Calvin Pace-Bryan Thomas do their thing every play. They bring the heat at the quarterback, they lay big hits on anyone in their way, and they change the game outcomes on a weekly basis.
Tony Romo is about as unclutch as pre-2009 ARod. The play of the game was Romo’s boneheaded goal line fumble with under nine minutes to play and the ‘Boys leading by a touchdown. A field goal would have made it a two-possession game and could have put the game out of reach. I like Tony Romo, but if he keeps this up, he’ll be slapped with the “can’t win the big one” stigma before too long. Dallas’ playoff record with Romo at the helm is 1-3 including the disastrous botched snap in Seattle which was 100% Romo’s fault. Granted, this was not a playoff game, but miscues like this in front of a national audience cannot make Jerry Jones’ plastic face happy.
Posted by MSpiciarich at 9/12/2011 11:45:00 AM