I know the format of this blog is kind of informal, not a lot of serious talk on here... But I live in NY and 9/11 was a big deal for everyone here. Sure it changed the nation, but it happened here, we had to deal with it first hand. I was fortunate enough not to have lost any family members or loved ones, but I know a lot of people who were first responders and who had lost people they were very close to.

My roommate joined the Army to defend our country. I'm obviously forever in debt to him for that, it's something I think about every time we hang out, just the ultimate sign of courage - he put himself on the front line for us so we can live our life and enjoy the freedom he was defending. He's the fucking man. I'm glad he was able to come back to us unharmed and he escaped being eaten by any camel spiders (Google that shit, I'm not posting a pic because it scares me).

My cousin is helping rebuild down at the site. He's working on the Freedom Tower or WTC 1, not sure which name they're sticking to at this point. He's up there everyday working hard to rebuild that thing and I think it's pretty awesome he's a part of the process. He posted this picture of it around 5am the other day, he couldn't figure out words to describe it - I suggested: fucking awesome. 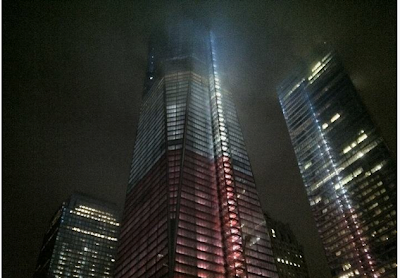 So obviously it will be an emotional day for a lot of people. I love the fact we have sports to bring us together, they've always been there to kind of distract us from things. At this point, it's no longer looked at as a distraction as it is a testament to the United States. You can knock some buildings down and think you shook us, but we're still living a free life and enjoying the things you don't want to enjoy or won't allow your country to enjoy. So on September 11th, I'm going to crack a beer and watch the NFL with all of my closest friends, just like I did before and there's nothing you can do about it.... Because I'm free.
Posted by RP at 9/11/2011 01:46:00 AM

Email ThisBlogThis!Share to TwitterShare to FacebookShare to Pinterest
Labels: 9/11, USA