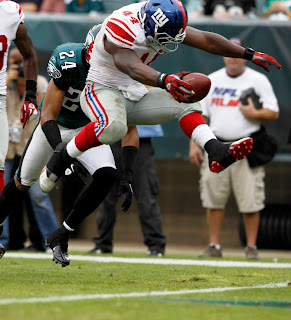 Pretty sure in games that Ahmad Bradshaw starts power spiking the ball all over the field the Giants are something like 93-0. You know what else helps? Having Brandon Jacobs immitating Hakeem Nicks, Eli not being an idiot but still looking retarded, and Victor Cruz making Nnamdi Asomugha look like an undrafted rookie free agent. All I know is Cruz missile better have a 99 break tackle rating in Madden '13. Just racking up the YAC on the 74 yarder. Also helps that Nnamdi can't tackle for shit. Nothing like blanketing a guy with help from the safety and still having him out jump you and score on your ass.

Look of course this is going to sound like a complete lie because I haven't been blogging for more than 10 minutes so there's no record of this.... But I've been saying it for a long time that Asomugha is the most over-hyped player since LeBron. Guy got 28 balls thrown at him last season, zero INT's and 5 passes defended and this guy is good? How can anyone know if he's good unless you throw at him? Giants threw at him yesterday and guy looked pretty average to me. I looked up some stats to back up my point to show I'm a boss and look at this shit:

When quarterbacks threw at Nnamdi in 2010, they had a passer rating of 98.1 versus a 32.3 rating against Revis.

The thing that's more impressive about that, is Revis always lines up against the other teams #1 guy, no matter where he lines up. Nnamdi only stays on the left side of the field, so whoever he gets is who he covers. How's that make him better? It doesn't. Guy is the most overrated player in football, and it's not even close. Boom roasted. 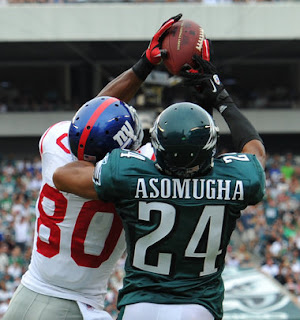