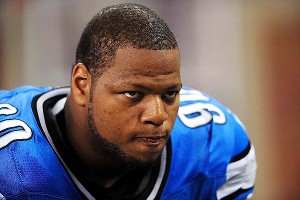 Is there a scarier human being on Earth than Lions DT Ndamukong Suh?  I refuse to wear even the jersey of a quarterback for fear that this monster is going to jump out from behind a tank, since I'm pretty sure that's the only thing Ndamukong Suh could successfully hide behind, and pile drive me into Madison Ave.  His name in Cameroon language means "House of Spears" for chrissake.  I'm surprised more hasn't been made of the fact that his first name has KONG in it.  If there was ever a Kong in football, it's this guy.

I remember watching this dude at Nebraska during the Big 12 championship game a couple of years ago.  Texas was a heavy favorite in that game until Suh dry-humped Colt McCoy up and down the field for four quarters.  Colt McCoy's sister actually got pregnant from it it was so blatant.  Colt McCoy actually stays up all night the day before the NFL releases the new season schedule sweating his balls off in fear that he is going to have to face the Lions.  Texas ended up winning on a last second field goal, for which Suh publicly blamed himself for weeks because he didn't block it.  Seriously?  A lineman blaming himself for losing a game because he didn't block a field goal?  Normally I would chalk that up to bull-shit blame taking in a misguided attempt to be a hero, but in this case I believe it.  What college offensive lineman was stopping this guy?  How bad was the rest of the Nebraska field goal blocking squad, because you know they were at least quintuple teaming Suh during the kick.  Honestly, how did any team ever get off a kick against Nebraska that year?

Meanwhile, Suh is just starting his second year in the NFL and he has already amassed over $40,000 in fines for blasting quarterbacks.  In discussing at hit on Jay Cutler which cost him  $15,000, he said:

"Full speed, it looks awful. Slow it down, and you see my hand is right in the back of his numbers. And because he doesn't see me, that's why he falls the way he does. I'm powerful; I'm lucky enough that I'm strong and I refine that in the weight room. I know how to hit, and I know how to tackle to where somebody's going to feel that. Whoever I hit is going to feel that hit."

Basically, he just hit Jay Cutler so hard they had to fine him.  The NFL was like, I don't know exactly what's wrong with that, but I know it just has to be illegal.  And if that is not the scariest thing you can say about a hit you got fined for, I don't know what is.  He could have got all whiney about not deserving a fine and how the NFL is a bunch of pussies now or he could have been like well I'm a competitor and I just want to win.  But no, he analyzed it like an engineer looking at how a bridge collapsed.  You see where my tree trunk arm shattered Jay's spine?  That's where I had him.

I am going to buy a Suh jersey and wear it.  Everywhere.  To work.  To the bars.  If I ever went to church again I would wear it there.  Job interviews.  My wedding.  Just so he knows I like him and not to dismember me.  Don't hurt me, Ndamukong!