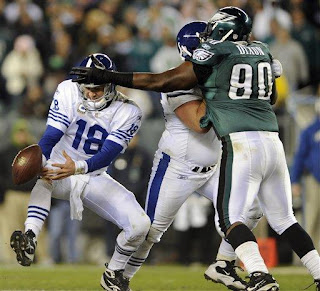 ESPN - Just suppose for a second that one week after throwing for 517 yards -- the fifth-highest amount in NFL history -- Tom Brady does it again this Sunday.

He couldn't, you say? Of course he could.

In the wake of the Week 1 passing assault, it should be increasingly obvious that a perfect storm of offensive innovation, Brady's own wizardry and what amounts to the NFL's ban on defense as we once knew it -- particularly when it comes to hitting the quarterback -- have made it so that he could pile up 400-yard games routinely this season. And not just Brady. Drew Brees, Aaron Rodgers, Philip Rivers and others could do it, too.

Herm Edwards, the former NFL defensive back and longtime coach-turned-ESPN analyst, admits to getting angry at times when he watches pro football's defenses handcuffed now by a growing list of restrictive rules and at the mercy of the quarterback.

"You pay that quarterback $15 million, you're not paying him to hand it off," Edwards says. "You want him to throw it. So you've got to protect him. Clubs, when they make him the highest-paid player on the team by a lot, are saying, 'Once they kick this thing off, you are the CEO of the team.' When that happens, guess what? That guy's got to be standing. If he gets hurt, you're in a ton of trouble. Ask the Indianapolis Colts right now. Peyton Manning is getting, what, $26 million? You can't have that. The quarterback has to be protected. And that helps provide an advantage. Tom Brady, if he has a view of the field and he can step up, he's got you. Take the snap, pat it twice, step up, it's all over."

So, the question is put to Edwards: Can Brady throw for 500 yards again this week? "He might," Edwards says. "He's got a damn good chance."

This isn't a case of one man wandering out on a limb to sell some hype. I had the same conversation with Darren Woodson, the former Cowboys All-Pro safety and now an ESPN analyst as well. "Would it surprise me if Brady throws for 500 yards again this week?" Woodson says. "No, not at all."

So I guess we should just expect every passing and offensive record to be shattered this year? I was watching college football last week and some of the hits I was screaming for a penalty. I'm officially conditioned to complain about regular hits now. I was watching Michigan/Notre Dame and saw physical play, hard hits, receivers getting drilled going over the middle - and I was shocked there were no flags. So wait, the NFL - the league you're paid at least $400,000 - has flags for hard tackles, but the students can light themselves up. Some safety approach. Pretty sad to see the 19 year olds play harder than the professionals. No wonder Andrew Luck wanted to stick around for another year.

Bottom line, these rules suck. I've never in my life seen so many people getting knocked out at the rate they are now. Whatever new helmet designs or new rules, they're not working. I never used to see people get knocked out when I grew up watching football. That's because no one ran around the field scared to get hurt, now all they do is think about it - now they hesitate into contact and someone ends up hurt. The rate of injuries now are just scary, and these rules need to be taken out, fuck safety.
Posted by RP at 9/16/2011 01:43:00 PM