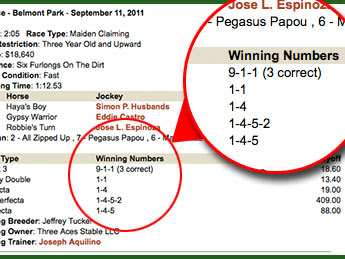 The Spread Sheet - Some pretty amazing things have happened at Belmont Park. This famous track is where Secretariat clinched the Triple Crown in 1973 with one of the most memorable feats in sports history.

Secretariat was a miracle in himself, but another tiny miracle happened at the track in the little town of Elmont, N.Y., on Sunday. The first three winners of the day were the 9 horse, the 1 horse, and the 1 horse.
That's right: On the 10th anniversary of 9/11, the first three winners were 9-1-1. Jockey David Cohen rode the first two winners, Say Toba Sandy and Wishful Tomcat. Then Simon P. Husbands rode Haya's Boy to victory in the third race.
Was it a coincidence? Call it what you want. But this didn't happen at any racetrack. This happened at New York City's home for horse racing -- at a landmark that served as one of the staging areas for emergency vehicles and personnel in the days following 9/11. And the races were held only a few minutes after a special ceremony to commemorate the sad anniversary.

Email ThisBlogThis!Share to TwitterShare to FacebookShare to Pinterest
Labels: 9/11