Jerry Jones Is Officially Outside Of His Mind 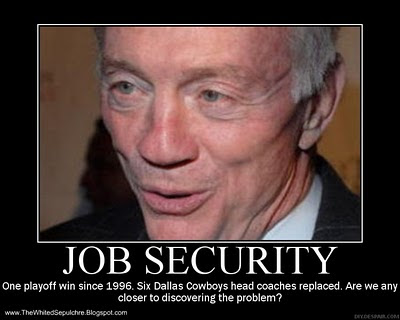 ESPN - Dallas Cowboys owner and general manager Jerry Jones considered Tony Romo's performance in the season opener "one of the best games I've ever seen him play" despite two critical turnovers late in the loss to the New York Jets.
Romo accepted the blame for the loss -- the first in franchise history after leading by 14 points in the fourth quarter -- after losing a fumble at the Jets' 2-yard line and throwing an interception that set up the game-winning field goal.
How old is this guy? He done running the worst organization in sports yet or what?


I know people want to say The Boss was the most insane owner of all-time, but you know what? The guy flat out wanted to win. He talked shit, he backed it up. In my opinion, he never said anything stupid - there was always a method to his madness. In Jerry Jones' case, there's no such thing as a method.


Guy got rich by striking oil or some shit, he's a fucking idiot who has no clue how to run a professional sports franchise. Sure he can make it profitable, but without sucking so bad that you can draft Emmitt Smith, Michael Irvin and Troy Aikman - you don't win the Super Bowls you won.


So thanks to sucking so bad, you drafted 3 Hall of Famers - which doesn't take a genius to do, and your team had some success. All of a sudden this guy is a good owner? When does that stop? How do you not take any heat without winning a playoff game in 13 years OR 1 playoff win in 15 years? (Whichever one looks better) Why are they always Super Bowl favorites?


And Tony Romo is the LeBron James of the NFL. Maybe not as big of a dickhead, I actually think Romo is a pretty nice guy, but holy choke artist. Why is Jones coddling him? I respect that Romo comes out and takes the blame, which he should - Who throws at Revis with the game on the line? - but it's so obvious Jones plays favorites, probably why the locker room implodes every season. Jones signed this guy for huge money, and he's done nothing but choke. So obviously he's going to have his back - but what the fuck are you talking about this is the best game you've seen him play? Are you serious?? Week 1 on national television and you have a 14 point lead going into the 4th quarter and you're franchise QB fumbles at the Jets 2 yard line and then throws a disgusting interception to Revis to lose the game and that's the best you've seen him play?? That's a really bad sign there Jerry boy.
Posted by RP at 9/14/2011 09:02:00 AM