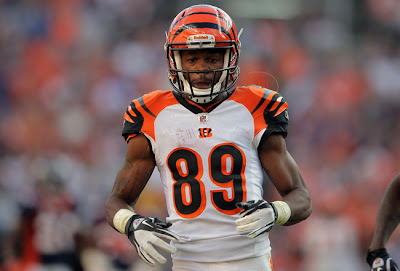 Shut Down Corner - A 2.5-pound shipment of marijuana was seized at the home of Cincinnati Bengals wide receiver Jerome Simpson(notes) on Wednesday.

Bengals tackle Anthony Collins(notes) was with Simpson at the Crestview Hills, Ky., house when police confiscated the package. A spokeswoman for the California Department of Justice said police tracked the shipment from California after a two-day investigation.

A woman, Aleen Smith, signed for the package before police swooped in. Simpson gave consent for authorities to search his home, where they found six additional pounds of marijuana and paraphernalia including "packaging materials, scales and smoking devices."

Simpson and Collins were detained but not arrested. The case will be addressed by the Kenton County (Ky.) Prosecutor's Office on Thursday.

The head of the National Marijuana Initiative, a government-funded organization that coordinates marijuana enforcement, told Californiawatch.org that the home was set up as a distribution network.

"They had it all set up to receive supplies of high-grade marijuana from Northern California, and from there, it was being distributed from that residence," Tommy LaNier told the website.

Wait. Why is this news? Don't they know Simpson is just doing what he has to do? He plays for the fucking Bengals. You need a felony wrap sheet before you can sign with the team, it's mandatory. That's why Carson Palmer was forced into early retirement and that's why in a couple weeks we'll be hearing how Andy Dalton slapped a couple strippers around then pissed on them. That's how the Bengals roll. They have nothing to offer on the field so they're playing that whole intimidation game by lining up an entire roster of parolees.

No fucking joke, since 2000 - 35 players have been arrested from the Bengals. That is fucking impressive. Jerome, real glad I didn't take a chance on you on the waiver wire, this would've been a real waste of the #1 waiver position. Can never trust these Bengals, just can't do it. That's why I'm taking San Francisco this weekend, how the hell are they underdogs to this team?
Posted by RP at 9/22/2011 03:38:00 PM