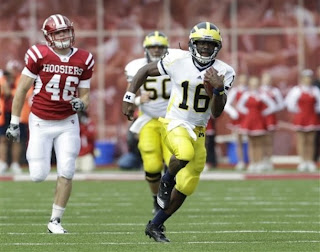 Haha besides Auburn maybe having one of the worst upsets of all-time almost happening to them - who gives a shit about the first week of college football? It's such a joke I can't even stand it. Let's find the most desperate school for money and offer to fuck the shit out of them on national television and give our players some confidence before the real season starts. I'm watching Michigan play Western Michigan and this is such a disaster. It's 34-10 in the 3rd and Michigan is doing And 1 moves into the end zone then celebrating like they just won a championship. I guess that's what you have to do when your program is one of the biggest fakes in history. Desmond Howard isn't walking through that door, you're about 83 years from being a real contender for the National Championship, so enjoy beating up on Western Michigan. I hate the hype of week one - that's why real ranking don't come out until October. Wake me up when the games matter.
Posted by RP at 9/03/2011 06:26:00 PM