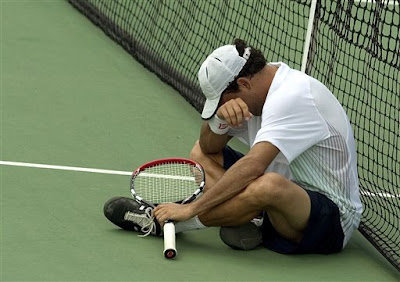 NY Times - Mixed doubles was front and center at Arthur Ashe Stadium one afternoon last week. Not on the court, where a United States Open women’s singles match was being played, but in a midlevel suite where two men and two women, drinks in hand and backs to the court, carried on as if they were at a cocktail mixer.

On one point, their peals of laughter caused the server to catch her toss and the chair umpire to call for silence. The suite holders were so oblivious, they did not know the scolding was directed at them. The match ended, and they kept talking.

“I always say that a big part of the stadium probably has never seen a tennis match in their life,” said Maria Sharapova, the 2006 champion. “They go out there, and for them, it’s like a party.”

The match marred by the suite talk did not seem to surprise Sharapova. “Drinking early,” she said, deadpan. “This is not like a baseball game or a soccer game where you just talk and yell and scream and don’t even watch half the game,” she said. “It’s quite different.”

Tennis players are like theater performers. Both require silence so they can hear their cues; in the players’ case, that would be the sound of the ball coming off their opponents’ rackets. And on each stage, longstanding etiquette calls for no flash photography, ringing cellphones, audience chatter or crowd movement, any of which can distract the performers and throw them off.

Is this a joke? Do Tennis players ever want people to show up and watch them play? Is their goal to literally end the sport altogether? CROWD MOVEMENT?! You want 25,000 people to sit there and not scratch their balls once for your stupid 4 hour match while they bake in the sun?? Get some cardboard cut outs and litter the stadium with them. That's obviously what these players want. I really don't get this - when I played baseball in college we would fucking love when people came down to games and went nuts, noise equals adrenaline. There was so much beer and liquor being passed around the stands it was great, people having a great time - talking shit - making out while we were crushing our opponent. It was a great time for everyone. All I ever wanted to do was play a game in front of 50 thousand screaming asshole fans. What did Jeter say? "I'd rather win on the road where people are booing us and hating us" because when you win and shove it up their ass there's nothing better than telling them to shut the fuck up and go home! Ask Jordan about that game winner he hit on the road in Utah - pretty sure he'll tell you that was the best moment of his career, silencing 30,000 screaming haters with one shot.

Why the fuck do tennis players need silence?? To hit a ball they self toss to themselves?? How about when Robinson Cano steps in the box against Justin Verlander and has to see a baseball coming out of his hand at 99mph with over 50,000 people screaming at the top of their lungs, see rotation, figure out the pitch type, location, and make solid contact like drilling it 420 feet to right center? I'd say that's a tad bit harder than hitting a straight tennis ball with a racket bigger than your fucking head. Who do tennis players think they are? They demand quiet. What world are we living in? Where loser tennis players tell us normal folk how to live our life so they can whine and complain about us taking their picture even though we probably didn't want it anyway - probably more along the lines of posting it to Facebook just to caption it with "Look how close I am to this asshole tennis player, don't even know his name or why I'm here I could honestly care less but I got these tickets for free from a friend of a friends boss who didn't want them" just to piss off the 1 Facebook friend who's obsessed with tennis and will probably cry and pull a hamstring when they see it on their news feed.

And what kind of balls on Sharapova, huh? "It's quite different." What a smug little bitch. Don't ever talk about the game of baseball like tennis has any superiority to it. Damn you for making me hate you because you are really hot and we would make amazing babies together considering you're an inch taller than me, wait what?
Posted by RP at 9/08/2011 01:18:00 PM