U.S. Building Secret Drone Bases But Somehow I Already Know About It 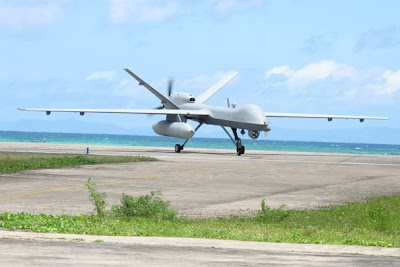 Washington Post - The Obama administration is assembling a constellation of secret drone bases for counterterrorism operations in the Horn of Africa and the Arabian Peninsula as part of a newly aggressive campaign to attack al-Qaeda affiliates in Somalia and Yemen, U.S. officials said.

One of the installations is being established in Ethi­o­pia, a U.S. ally in the fight against al-Shabab, the Somali militant group that controls much of that country. Another base is in the Seychelles, an archipelago in the Indian Ocean, where a small fleet of “hunter-killer” drones resumed operations this month after an experimental mission demonstrated that the unmanned aircraft could effectively patrol Somalia from there.

The cables, obtained by the anti-secrecy group WikiLeaks, reveal that U.S. officials asked leaders in the Seychelles to keep the counterterrorism missions secret. The Reapers are described by the military as “hunter-killer” drones because they can be equipped with Hellfire missiles and satellite-guided bombs.

Welp so much for that secret, huh? Doesn't the Obama administration know they have to pinkie swear that shit before talking about it? You don't just tell this shit to anybody, you have to trust them. And no way do you trust someone you haven't pinkie sweared with - that's national security basics right there.

How do you call something a secret when you're openly talking about it? Is that not one of the dumbest things you've ever seen? Telling someone the secret and still describing the plan as a secret and how it will still be a secret is pretty loony tunes. I mean they were being pretty specific about the locations of where these things would be based, I just don't see how this "secret" will do us any good at this point. Unless this is one of those acts our government isn't smart enough to pull off - leak a "secret" and then set up shop right next to the terrorists assholes then drone the fuck out of them while they're looking for some fake bases. Genius!