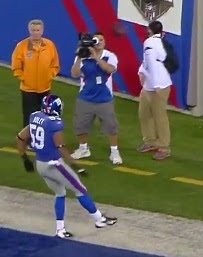 My first reaction is, my predicted score of Giants 31 Rams 17 would've looked a hell of a lot better if Tom Coughlin for some inexplicable reason didn't decide to punt the ball from the Rams 30 yard line with 2:08 remaining. A 47-yard field goal there makes it 31-16 and I'm pretty much dead on. I'm considering 99% of normal humans would've kicked a field goal there, so I'm going to go ahead and say my prediction was dead on and the score was really 31-16. I'm absolutely killing it with my predictions.

As for the other prediction of Manningham going for 6 catches and 125 with 2 scores, let's ask Eli about that. If Eli knew how to lead a receiver, Manningham would have honestly had 2 TD's in the first quarter. Eli horribly under threw him both times, one resulting in an interception (weird). Then the 3rd opportunity for a TD we can only blame Manningham for tripping on the 25 yard line, almost dropping a ball that hit him right in the hands and also giving himself a concussion in the process. That spelled the end of my fantasy week, my prediction and Manningham's night. Had Eli known how to throw the ball, he would've overshot my projections for him - let's say he caught all 3 of those passes in stride - that would've been 3 catches for 158 yards and 3 scores. Sure that's wishful thinking, but any average quarterback in the NFL could have made those throws. Anyway, on to the game:

Out of everyone I know, I have been the biggest Eli supporter there is. I don't know why all of a sudden, in a WIN, I fucking hate him. I couldn't stand watching him Monday night. The one thing I do love about him is his leadership at the line of scrimmage. He never seems rattled and always seems like he's in control of the game. Sure, he's a great game manager. But when does a #1 overall pick start playing like a #1 overall pick? Apparently Cam Newton thinks it's week one of your NFL career, but year 7 game 2 still Eli still isn't there yet. That Super Bowl thing can only get you a couple years of cushion until it's time to start performing. A #1 overall pick is not supposed to be throwing for 150-200 yards a game with a TD and 2 picks, that's Matt Cassel's job in KC. Eli compared himself to Brady a couple weeks ago, I had no problem with that - good you've got confidence in yourself, you're challenging yourself - good shit. But damn dude, you are literally nothing like him. Brady picks defenses apart, scares the shit out of defenses, stands in the pocket like he's waiting for paint to dry. Teams love playing Eli though, they blitz the shit out of him so he makes stupid faces when he gets hit and laugh at him when he flails his arms in the air at one of his stupid passes. I just always wonder what the Giants offense would be like with someone playing QB who had an arm. I can't imagine what Rodgers would do with these WR's. Nicks would go for 1,500 and 15 TD's, Manningham would be 3 TD's richer right now, the Giants wouldn't be 6 for 25 for 3rd downs so far. I've officially come to the conclusion that Eli is just average. I still don't know why it happened now, but seeing him look like a 2nd or 3rd year guy on Monday night really pissed me off. I've realized he's hit his ceiling, he's just never going to be a guy to throw for 400 yards and 3 TD's. Unfortunately that's what the Giants need, and they don't have it in Eli.

The duo of Bradshaw and Jacobs combined to average only 3.5 yards per carry (31 carries for 109) against a Rams defense that gave up 7.4 yards per rush in week 1 against the Eagles (32 carries for 236). The blocking wasn't all that bad as it seems like the line is starting to come together, but both RB's looked tentative and slow. DJ Ware came in late and looked a lot quicker and showed some burst carrying the ball 3 times for 22 yards. This is the most important part of the Giants offense, if the running game can't get going - Manning can't use the play action which is the only way he's effective through the air.

Really the only bright spot over the first two weeks has been this defensive line. All the credit has to go to the freak JPP. Pierre-Paul was all alone week one and still managed 2.0 sacks and a forced fumble. With Tuck back in the lineup he was able to grab another half a sack while taking attention away from Tuck who got 1.5 sacks in his first game back. With those two out there, it'll be tough for opposing quarterbacks - and we still have Osi waiting for his WD-40 to dry off so him and his robo knee can get back on the field. Those three will be in constant attack mode and the defensive will improve greatly with all three on the field.

The run defense has been the biggest part. Granted the Giants have only faced a Redskins team with no talent and a Rams team with no Steven Jackson, so hard to look at them as the #3 ranked defense against the run and take it seriously, but let's just enjoy it while it lasts. Without Marvin Austin for the season, the combination of Chris Canty, Rocky Bernard and Linval Joseph seem to be doing a good job clogging up the middle.

And to the defenses credit, they've looked extremely good down by the goal line. Once they get pushed back there and are done faking injuries they are able to turn it up and hold the opponents out of the end zone.

The secondary is an absolute disaster. Coming into training camp it looked like a strong point of the team for the first time in years, with 2 young and HEALTHY safeties from the U and talent and depth at corner, this unit looked ready to become a very scary defense. Once the injuries started piling up to very key contributors, this turned into a JV squad real quick. Aaron Ross looks like a rookie free agent pick up not a 2007 1st round draft pick. He is fucking terrible. Instead of stepping up to the challenge of a second year quarterback trying to pick on you for an entire game on Monday Night Football, you put your tail between your legs and got benched just to come back in and fair catch the last punt, good work. Denario Alexander caught 3 passes - THREE! - for 122 yards and a TD. Not going to be able to expect a lot more out of this group until first round pick Prince Amukamara is able to return. For now the defensive line will be relied on to pressure the QB to help mask the coverage issues. If they have to cover for more than 4 seconds they will get gashed every single week.

A win is a win, but it was extremely ugly. It was almost disappointing. I actually lost confidence in Eli and our running game. The wideouts have talent, I think Nicks and Manningham are one of the top duo's in the league - but missing a #3, #4 and #5 and #6 WR really hurts the Giants. Can't have two guys catching the ball, need more options. Once Stokley gets the offense down, he will be a big safety net for Eli and God knows he needs one.

Next week the Giants go down to Philly in what is sure to be an absolute shit show. Rumors are the Vick will play, which is what the Giants want? They keep publicly asking for it like fucking idiots (Antrel Rolle, weird) so Vick will give them exactly what they're asking for, and if he does then I can't see the Giants winning with their secondary in the shape that it's in. I still don't trust Vick as a pure passer, but he'll be able to run around and give his receivers plenty of time to get open. If the Giants and their D line can't contain Vick it will be a very, very long day in Philly.
Posted by RP at 9/21/2011 11:40:00 AM