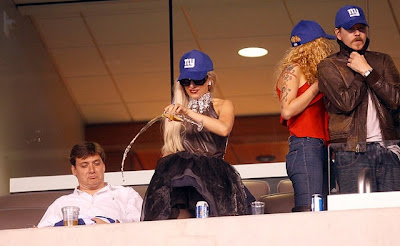 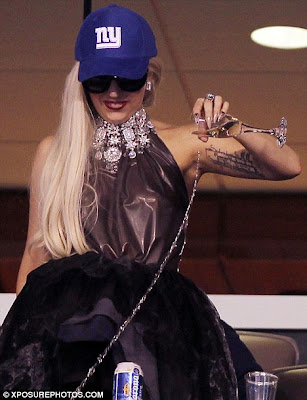 The buck toothed hate monger was at it again last night, this time spilling her champagne all over some defenseless retarded people trying to watch the game. Yet no one cares, everyone will keep sucking this frauds dick until it falls off, except it probably won't. She's living real lavishly in that zone called "I can literally do anything I feel like doing and all my fans will love me more for it" territory. ﻿She can give an interview and be asked a question like "When's your next album coming out?" And her response can be simply "I hate fags." and she can walk away like a tough guy and not hear a thing about it. Her fans will just make another Twitter account and follow her again, it's sickening. No one on earth should have this sort of delusional power. Lady Gaga easily has more influence than the President of the United States - Fact. If she tweets "Go to war." 8 million people will pack their shit and kamikaze a plane right into Afghanistan no questions asked. It's like she runs some sort of super cult and everyone is under hypnosis. Not me though, no sir. I see right through this asshole. Completely normal one minute when she comes on the scene to a complete freak who has absolutely no idea she's still on the planet earth. She has no concept of right and wrong anymore, no idea what rules are since absolutely none apply to her, it's crazy town. I'll never understand how anyone can take this dickhead seriously, her and Bieber make me sick. They're so egomaniacal and full of themselves I can't even stand it. A meat suit? Bieber wearing women's clothes? This world is so fucking fucked up.
Posted by RP at 9/20/2011 01:09:00 PM