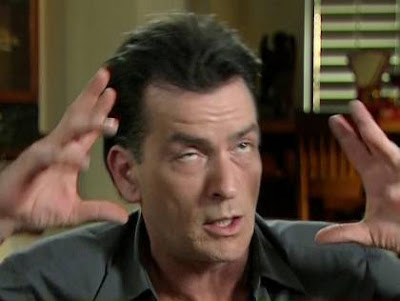 YAHOO - Charlie Sheen, Warner Bros. Television and Two and a Half Men creator Chuck Lorre have reached a settlement over the actor's $100 million lawsuit against the studio, TVGuide.com has confirmed. "Warner Bros. Television, Chuck Lorre and Charlie Sheen have resolved their dispute to the parties' mutual satisfaction," the studio said in a statement. While details of the settlement were not released, the former Two and a Half Men star will reportedly get roughly $25 million to settle out of his contract. According to The Hollywood Reporter, the terms of the settlement include Sheen dropping all of his legal claims.

This guy just cannot fucking lose, huh? This guy has been going HAM on top of HAM ever since he went nutso on his wife and kids. Tell ya what - I would sell my imaginary kids out for $25 million so fast Charlie Sheen's head would spin. I'm so sick of this guy and his crazy talk, but I can't deny he's making power moves the likes of which I've never seen. Imagine someone paying you $25 million to stop working? So what do you do? You take that shit, drop your lawsuit and back to your life of snorting coke and slamming porn stars in your mansion like you read about. Guy might be straight crazy and all but it doesn't matter if you win being sane or win being a nutjob, winning is winning.
Posted by RP at 9/27/2011 01:23:00 PM