Can the Noid play QB for the Giants? 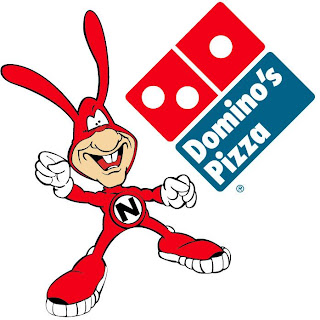 Can someone explain to me this new Domino's radio commercial that advertises the fact that you can now look up the name of your delivery person on-line when you order Dominoes?  Am I supposed to care what this dude's name is?  What value, exactly, is that adding to my pizza eating experience?  What are they expecting I am going to do with this information?  If my pizza is late or cold, do they think I am going to look up this guy's family and demand retribution?  I just look them up in the yellow pages, show up at their house, burst in through the door and dump a big bucket of ice on their dinner table.  "Thanks for the cold pizza Randy Weaver!  Let's see how you like it!" Am I supposed to write the name down of the dude who was late so next time I see he is assigned to my delivery I can get the sniper rifle ready up in the attic window?  What type of pyscho stalker/killer is this feature supposed to please?

About the last thing I care about when I'm sitting in my living room watching the Giants get dick punched by a quarterback that barely won the starting job on one of the worst organizations in football is the name of the fucking pizza delivery guy.  The poor guy probably crashed his 1982 Toyota with the little dominoes hat on the roof and no chrome when he heard Pic 6 Manning start 2011 just like he ended 2010, by throwing touch down passes to the opposing defense.

On second thought, maybe its good that I can look up the dude's name.  I mean, obviously I would never really order Domino's.  I'm a New Yorker, I have standards.  But let's say hypothetically that I had done a pickle back for every time that I wanted to kill Eli Manning, or every time the Giants secondary decided they didn't want to hassle a Redskin by covering him, and so now I'm 49 shots deep and I'm hammered enough to want that circular garbage they call Domino's.  At least if I know the name of the delivery guy and he looks semi-athletic we can probably get him to play corner for the Giants.  I mean, if he can carry a pizza from a car to my door in the dark, he has to be at least as good as Corey Webster, right?  Plus Webster just played a whole game without incurring an injury, so he's due.  The Dominoes squad may end up being a vital source of talent yet.
Posted by Craig Gridelli at 9/11/2011 11:12:00 PM