Leo Nunez Suspended For Not Being Leo Nunez - Promptly Deported 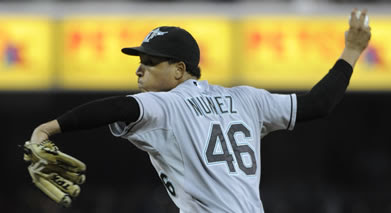 Miami Herald - Closer Leo Nunez has been placed on Major League Baseball’s restricted list and was suspended by the Marlins for undisclosed reasons for the remainder of the season, a source told The Miami Herald on Thursday.

A person familiar with Nunez’s immigration status, however, said the reliever has been playing under an assumed name, and the issue has prompted him to return to his native Dominican Republic. Nunez might have been aware of the issue as far back as July, the source told The Herald.

“I can’t yet comment,” said Nunez’s agent, Andy Mota. “This is very recent. I don’t want to say anything at all.”


A source told The Associated Press that Nunez’s real name is Juan Carlos Oviedo, and he is 29, a year older than listed in the Marlins’ media guide.


A baseball source said that in order for Nunez to be reinstated from the restricted list he must clear up an immigration issue that apparently has to do with missing paperwork.

So Nunez might have known about the issue as far back as July? I don't know but don't you think he was aware of the issue the minute he started calling himself Leo Nunez? Usually when I refer to myself as someone completely different I find out about it right then. But I don't actually blame him for saying he's younger than he is because I have a hunch he honestly has no clue when he was born, but to be only a year off is pretty impressive. Not sure I see what the punishment here is, he's getting a paid vacation back to the Dominican while his team rounds out the season playing in front of 49 rabid die hard Marlins fans? Then all he has to do is find that missing paperwork, you know, that one paper with his name on it, and he's back. No big deal.
Posted by RP at 9/23/2011 09:16:00 AM