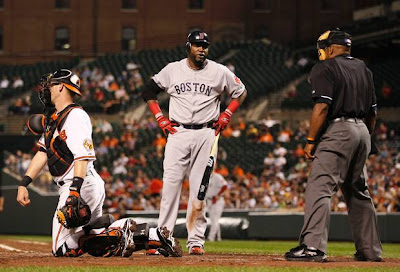 ESPN - The Red Sox found another way to lose, this time on a broken-bat single and an inside-the-park homer, and their 6-3 defeat against the Baltimore Orioles on Monday night dropped them into a tie in the AL wild-card race.


Boston's 17th loss in 22 games enabled Tampa Bay to pull even in the duel for the league's final playoff spot. The Rays, who beat the New York Yankees 5-2, trailed by nine games after play on Sept. 3.


The Red Sox had either stood atop the AL East or led the wild-card race every day since before play on May 24.

Is there any possible way to put this into perspective? Anyone else realize we're witnessing baseball history here? The 2007 Mets were bad, but this is bad. The Red Sox have lost 19 of their last 25 games, that's fucking impossible. Sure they can still make the playoffs, but what are the odds of that happening? They need to win two in a row and they haven't done that since last month. They were up 9 fucking games on Labor Day and are now tied for the Wild Card. Anyone watching the Yankees/Rays game last night noticed two things - the Yankees don't give a shit and are rolling our all their September call ups and Phil Hughes, and that the Rays just fucking want it. They're busting their ass all over the field just to eek out a win over the AA Yankees. I don't give a shit what scenario is better for the Yankees going into the postseason, I just want to see this collapse be completed. I feel bad for the Mets, kind of need someone to take the title of biggest choke artists of all-time so they can move on with their lives.
Posted by RP at 9/27/2011 09:35:00 AM