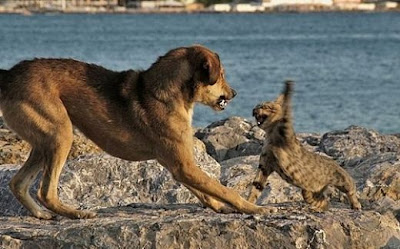 Typical, dog just wanted to show off his new grillz and cat had to be a dick.
Yahoo! - One woman's attempt to get her lost cat back has the web buzzing. It started when American Airlines lost Karen Pascoe's cat Jack as she boarded her flight to L.A. from New York's JFK airport last week. Jack escaped his kennel shortly after being checked in, and he is still missing. Pascoe's sister then created a Facebook page for the cat, which has gained nearly 1,500 "likes." The outrage has spread to Twitter, where the #findjackthecat hashtag is picking up steam. American Airlines responded and apologized, updating its Facebook page with its efforts to find Jack and offering to fly Pascoe back to New York to search herself.


American Airlines stock just went through the fucking roof in my book - any airline that just completely loses a cat is A-OK with me, that's the airline I'm flying. First off, I fucking hate cats. It all started when my cousin brought his new cat over and I started sneezing all over the place. I think I was 13 and I literally was convinced I was allergic to nothing and I was some sort of super-human. Well that cat ruined my life that day. I forgave him because that's what I do, I'm at my cousins and try to play with the cat only to receive a fucking razor blade rigged paw to my face. What the fuck cat? Lesson learned. I've never once met a single cat that didn't piss me off. Whether it's be a complete bitch who thinks it owns everything and turn on its owners and their friends and family, or you're somehow nice aka lazy fucks who don't care about anything but in turn they make me sneeze my insides out.

What I like about this is that American Airlines lost the cat, but really doesn't care. You know what this does? It opens the door for more shit to be lost. Like first it's the cats, which if it ends at that is still fucking awesome, but maybe we step it up to crying babies next? Just completely lose those assholes mid flight, right out of the landing gear door at 30 thousand feet. No one would even hear it or see it - perfect, no worries. American Airlines, I see you workin'.