Actually didn't know that. But wait, what about Joe Carter? Aaron Boon? I'm guessing he means clinching a postseason spot.. 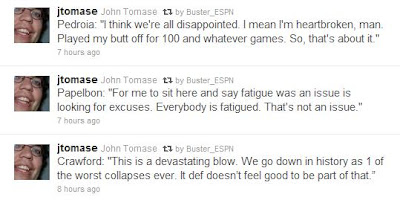 Does Perdroia know how many games are in a MLB season? I thought at first maybe he was on the DL this year and he was trying to be precise, no he played in 159 out of the standard 162 games - must've been the emotions of being part of the biggest choke in sports history getting the best of him.

Papelbon, I see what you're doing - saying fatigue is an issue is looking for an excuse.... But then saying everyone is fatigued. Okay.

Crawford, whether your team made the playoffs or not, you didn't help. You would've felt shitty either way so don't worry about it.

Good call with Papelbon DEALING. Maybe a little early for that tweet, though, your boy Pap pretty much vomitted on the mound right after you posted that.