Who Are You, Bryan Kehl?

ESPN NY: EAST RUTHERFORD, N.J. -- New York Giants defensive coordinator Perry Fewell would not confirm or deny accusations made by one of his former players, Bryan Kehl, that he coaches his players to fake injuries.
"I can't say I've ever done that and I can't say that I haven't done that," Fewell said Thursday…
Kehl, who now plays for the St. Louis Rams, made his accusations to 101sports.com, the website for the ESPN Radio Affiliate in St. Louis.
"Perry Fewell coaches that," Kehl said. "He's their DC (defensive coordinator). He coaches that."
Asked if he thought Kehl's accusations were an attack on his integrity, Fewell replied, "I'm not gonna respond."
Grant, one of the players accused of faking, called his former teammate a liar.
"That's a lie. That's a lie," Grant said after Giants practice on Thursday. "Perry never said that a day in his meetings since I've been here. And Kehl's been here as long as I have with Perry Fewell."
Asked why Kehl would say something like that, Grant replied, "Because I guess he's not here no more. He feels like they did him wrong."
Kehl played one game for the Giants last season -- Fewell's first with the team -- before being waived and signing with the Rams.
The Giants were accused by the Rams of feigning injuries during the first quarter of Monday night's 28-16 New York win to slow down the St. Louis offense.
Grant and Jacquian Williams both fell down in apparent pain with the Rams -- who were using an up-tempo, no-huddle offense -- driving and at the Giants' 7-yard line. Grant vehemently denied any wrongdoing on Wednesday, saying he was too tough to pull a stunt like that.
Grant's comments came as the NFL sent a memo Wednesday to all 32 teams warning of fines, suspensions and loss of draft picks if the league determines players faked injuries during a game.
"And even if (Fewell did), that was a coward move to me," Grant said of Kehl. "Even if that's something I was coached and I go somewhere else, I'm not selling out the guys that I went to war with. That's just not me. So that's a coward move if that was the case, and he still said something about it, but it's even worse when he lies. A grown man lying on another grown man, that's terrible."
The radio station 101sports.com reached out to the NFL to ask if the league would investigate the Giants in light of Kehl's comments.
League spokesman Greg Aiello wrote in an email that the Rams "have not made a formal complaint requesting an investigation. In addition, there is no basis for taking action against the Giants."

**************************************
I hate the New York Football Giants with a passion. They sit in the lower levels of my vision of hell right next to deadbeat dads, Roger Clemens, and people trying to make a quick buck at someone else’s expense (think: the joker who sued McDonald’s for making him fat).
It would stand to reason that someone bashing the Giants would go on my Nice List. However, Bryan Kehl’s comments make me hate him and not the Giants.
By disclosing this “secret of the game” that no one actually cared to know, Kehl ruined his reputation at the expense of Fewell’s for no apparent reason.
What is this dude trying to accomplish by running his mouth here?
Your career as a linebacker doesn’t figure to last much longer. The Giants cut you, and their linebacking corps is a joke. Are you trying to score a book deal? Some cheap publicity? Nothing good can come out of this for you. You have basically burned every bridge around you. What defensive coordinator would want to work with you now? Who wants to be your teammate? You just lost the trust of everyone in the league. Nice work. 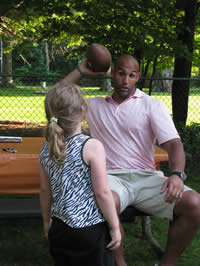 Closest thing to a game-action shot I could find of BK
I’m a believer in unwritten rules. One of the most important: what is spoken in the locker room, stays in the locker room.That includes any and all gamesmanship tactics.
Kehl is exactly the kind of guy that would snitch on one of his BYU teammates for having premarital sex in college. I’m about 450% sure he’s the one who found out about Brandon Davies banging that cheerleader and got him suspended, effectively ending any chance we had of seeing Jimmer Fredette in the Final Four. Since March, I was pissed at Jimmer for ruining my bracket when all along it was Bryan fuckin Kehl’s fault.
And radio station 101sports, you can join Kehl, Clemens, and the others in my hell. Stop trying to find dirt and start shit like you are some kind of useful investigatatory sleuth. Worry about your hometown Rams being the worst team in the league through three weeks.
Follow on Twitter: @Walter_Yego
Posted by WalterYego at 9/26/2011 06:05:00 PM