A-Rod Up With Season On The Line - Hell Is Still On Fire, Pigs Still Not Flying, Yankees Season Over. 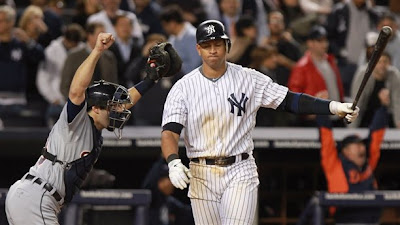 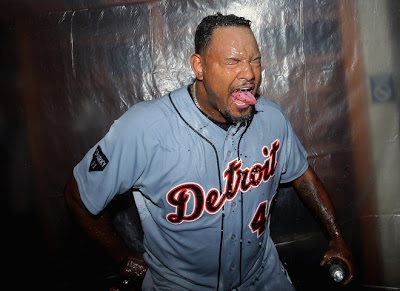 ﻿
Gotta love when Mets fans call us cowards. They can't figure out why losing sucks, but Yankees fans actually expect to win - it's an outside the box concept to Mets fans but trust me shit is exciting. Yankees losing is like them winning the Championship, it's what they look forward to every single year when they realize April 20th that the Mets are mathematically eliminated from the playoffs. Love to say I'm surprised by this, but it's in every Mets fans DNA to just root for losers and against winners.

As for the game/series, nothing really shocking here besides me admitting this: Valverde flat out shoved it up our assholes. I've never had that done before, and it wasn't comfortable, but I guess it's no one's problem but ours. I mean he did straight up tell us he was going to do it, told us the series was over, we should've seen it coming.... But we didn't. Blindly believing we had a shot, acting overly confident to hide the insecurities of being old and tired and having a rookie throw a series clinching game.
I'm still on the Nova bandwagon, two bad pitches and an "injury" in two innings isn't enough for me to crucify this kid - he was ready, he came out throwing strikes and minus back to back pitches that went yahtzee he looked pretty sharp.﻿ At least we know we have one starter next year behind CC.

Biggest thing that's been bothering me, and been bothering me since the day it happened.... A-Rod is signed through 2017. This is a problem. He made $31,000,000 this year. He's going to be making an average of $24 million for the rest of his career based on his contract. Is it me or aside from the genius Soriano contract, was this by far the dumbest move in Brian Cashman's career? He signed a 32-year old at the end of his prime to a 10 year contract for $275 million dollars?? What was the thought behind this?? This guy is clearly donezo. He played less than 100 games this season, has been injured and on the DL on and off since this deal was signed. He's just not the same player he was when he was on the sauce, simple facts. He absolutely sauced up in 2007 and got away with it to put up those monster MVP numbers just to opt out and get this filthy asshole, money grubbing, cocksucking contract - and he sauced up for the playoff run in 2009 because it's obvious he can't fucking hit in the postseason. You can't tell me this guy was focused in that last at-bat against Valverde - he was stressing the fuck out about what everyone was going to say today when he struck out with the game on the line.

It's not all A-Rod, but he frustrates the shit out of me. I honestly wish he was a fucking dick. He's so politically correct with all his bullshit fakeness in interviews it makes me sick. I wish he'd just be like "Well I'm trying to do my fucking job and these asshole fans just boo the shit out of me, whatever I'm just gonna go home call up whatever celebrity Jeter is finished fucking and bang them, all those fans have to go back and have the same lives they had yesterday with the same problems so I'm good" like just be a fucking asshole and own it - have a personality. He's so fucking bland it makes want to vomit, it's embarrassing. He tries so hard for peoples approval and instead he should be telling everyone to suck his dick and take a look at his bank account. Guy has a championship and a billion records yet he acts nervous as fuck under pressure like he even has anything left to prove - just fucking play! Damn.

But bottom line, when you have the bases loaded twice and the only run that comes across is via the walk, you're probably going to lose. The lineup is worth a bajillion dollars you think it could produce some runs there. 40 guys left on base this series, the Yankees straight up didn't deserve to win it. They're old, slow, tired, careless. That's what it looked like. Only positive from this is Cashman should be pissed enough about all the critics blasting him from not making any moves last off-season and at the deadline and pissed enough about the way the team played that the next couple months should be fun as shit to watch. I'm going to break out the popcorn and watch him rip the team apart and reassemble it with some new free agents... Can't wait. Best team money can buy folks!
Posted by RP at 10/07/2011 08:44:00 AM