Week 7 Picks: Get It While The Gettin's Good (@MSpici)

Feeling great after my first 3-0 week of the season. Let's keep rolling.

Jets +2: I love this game. Really really love it. Being a home 'dog is a slap in the face no matter whom you are playing. Rex Ryan will use that as motivation. Also working in the Jets' favor is the cross-country trip the Chargers have to make to play the early Sunday game. The Chargers are also coming off a bye, which I think is a bad thing this year since players are mandated to take four consecutive days off in a row. Expectations are low for the Jets (that's when they have thrived under Ryan) and sky-high for the 4-1 Chargers. Look who this team has beaten: Minnesota (1 win on the season), Kansas City (2 wins), Miami (0 wins), and Denver (1 win). That's four combined victories in 21 games. Not impressive at all. 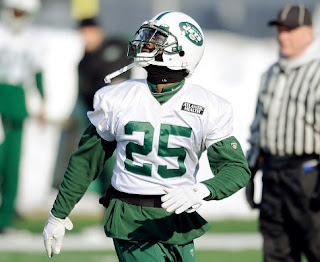 Gotta think this guy has at least one big special teams play on Sunday.
Panthers -1: John Beck is the starting quarterback of the Washington Redskins this week. No one in the Redskins organization wanted this to happen (including their best WR, Santana Moss). Rex Freakin Grossman beat him out in the preseason. If that doesn't tell you everything you need to know, you are not a football fan.

Colts +15.5: Give Indy credit. They are still playing hard. For that reason, I think they will show up in primetime on Sunday Night Football to keep this game interesting. It also helps that anyone can score on the Saints defense.