Are The Giants A Bad Matchup For The Patriots? 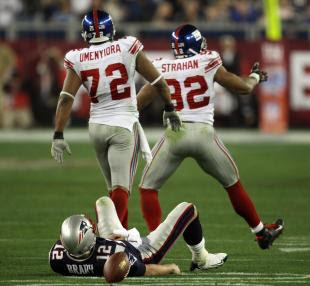 Let's just talk about the big retarded looking mouth breathing elephant in the room. Eli Manning is playing MVP football right now. The Patriots are 32nd in the league against the pass, that's dead fucking last. They're the only team in football allowing an average of over 300 yards per game through the air. That's atrocious. Manning has been playing smart football all season. Cue the "WAHHHH but he said he's in Brady's class! WAHHH!". Well you know what? He has been. Check the numbers and they're pretty much spot on. A battle of the #2 and #3 QB's of 2011 except Eli gets to play against Milton High Schools JV squad and Brady has to go up against the best defensive line in the game, the one leading the NFL in sacks. If Brady decides he wants to stand in the pocket like some cocky asshole like he normally does, I have a feeling he might get killed. JPP tears his own teammates ACL's for fun so might want to learn how to move out of the pocket once in a while or you can consider your season over.


The match up just sucks for the Patriots. The Giants have nothing to lose with a 2 game lead in their division, and the Patriots have everything to lose being -10.5 point favorites and needing to take over first from that team the Giants beat this year but the Patriots couldn't handle. This is where the Giants come out and play well, when there's no pressure on them. In all honesty, no one is expecting them to go to Foxboro and win this game, but the problem is - everyone expects the Patriots to win. Anyone remember Super Bowl XLII? The biggest advantage the Giants have is they don't have to blitz to get pressure, because Brady is a genius with his hot routes. And if the Giants can keep guys back it will only give the line more time to get to Brady. You know Matt Light is still shitting himself having nightmares of that Super Bowl. We should see some false starts on Sunday.

Whatever Jerry Thorton is saying about Brandon Jacobs and news that's 5 days old already is all well and good, but as a Giants fan I'm pretty excited to see this fucking tank get an opportunity Sunday. He's been whining about it all season, and now he's got his chance. As much as it is sucks to complain about your roll - no one wants to complain about their roll and immediately be given an opportunity to do something about it and then suck. If anything, whatever motivation he had is now quadrupled because if he doesn't do well he's basically sealed the fact he's done in NY. Can't say you're going to do something, get 10 all purpose yards against the Dolphins and then get a start and do dick against a shitty defense. A couple reenactments of this would be alright.

There's a chance Hakeem Nicks sits this game out, but I really don't see that as a big problem. Mario Manningham can pick up the load and Victor Cruz has pretty much solidified the fact he's a legit NFL wide receiver at this point. Fortunately the Giants have serious depth at WR and RB, so just in case they haven't been playing with enough injuries somehow they can absorb these two. As long as the defensive line is at full strength and can mask some of the issues in the secondary, the Giants should be fine. The biggest issue I see is the tight ends.

The Patriots have a future pornstar and another fucking stud as their tight ends and the Giants have always had issues covering TE's over the middle. With Welker doing his thing and these two TE's running around the middle of the field, it could be an issue. I have Gronk on my fantasy team so as long as Hernandez isn't the one burning through the secondary I won't flip out. But Antrel Rolle is talking again which means he'll miss at least 6 tackles and Kenny Phillips is backing him up because they both came from the U and Boston fans know what I mean enduring Brandon Meriweather for the last couple years, so they'll obviously both miss assignments and the TE's will have a big day.

But enough with the negatives - if Eli can continue playing at a high level, which shouldn't be an issue this week, and he can be mistake free, the Giants are staying in this game. He has a shot to throw for 350 and some scores and he has the capability to hang with Brady if this becomes a shootout. It all comes down to the Giants defense in this one. If they can get to Brady and stop the run, which they haven't been doing, they have a real good shot to steal one in New England. The way the defenses have been playing there's no reason not to give the edge to the Giants in this one, and with Eli playing in Brady's class - don't be shocked if they take this game.

PS - You think they would communicate and not put the same exact headline? But I guess there's really nothing more to say here: 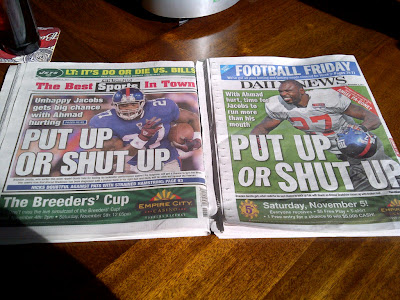